I'd known about Little Duke for years. regularly, this venue would appear on the club trip list, but it would always also disappear. Now I think I know why.

The last time it appeared on the list I expressed my enthusiasm - I always like new mines! And it didn't go unnoticed. When the trip was (inevitably?) replaced by another, Rick decided he would want to go there anyway, so he sent out a call of his own. I would go to Little Duke!

We gathered with eight enthusiasts; four of us came from Upton Cross. Lionel had invited me and Hugh over for dinner the night before. It had been very nice! So all of us were cheerful but slightly foggy in the head.

While we looked for the shaft of our choice we saw some more holes in the ground. Interesting! But we found the desired one, and started rigging. This involved some interesting sights of me standing on Lionel's shoulders, tying the rope around a tree high up; that would make the getting in and out of the shaft easier.

Rick was the first to go down. He warned against dodgy timbers. I was next. It was a nice place! But the floor looked dodgy. As soon as Dave appeared too, he claimed it had collapsed a bit since the last time he had been there. We could still get across, though.

In the time it took Dave to come down I found a dead bat. I was afraid that we would step on it with our big boots; I decided to lay it somewhere else, out of the way. But as soon as I touched it it started to move! I didn't know what to do. It clearly was hurt; it hadn't been lying there for dead for nothing, and it had a bloody face. Should I shelter it or mercifully kill it? Dave stayed calm (as he always does) and said I'd better gently pick it up and dangle it from a convenient wall. I did that; sure enough, the little bat claws immediately gripped on the first irregularity on the rock. It hung there rather dazed; its wings were just dangling arbitrarily. Poor little thing! I also found  a much healthier-looking frog, but it would probably be more doomed than the bat if it stayed there. But what can you do? We went on. There was another pitch! 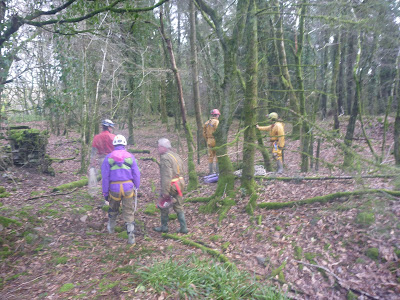 Finding the shaft in the woods 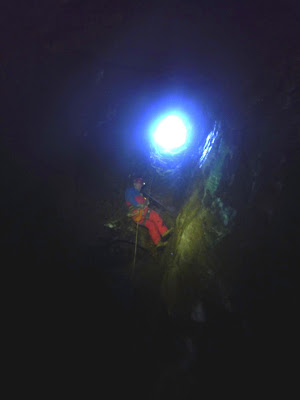 Dave coming down without his light on 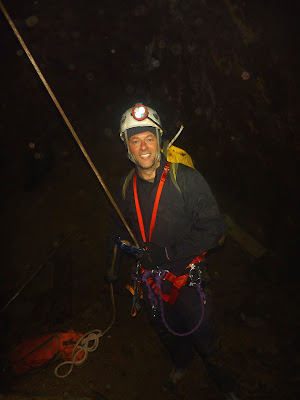 Dave rigged it, but he wasn't keen on going down. He still suffered from his shoulder injury. Paul wasn't keen either; he didn't want to get wet. And Corinne bailed out; there was very, very dodgy timbering in the winze, and that's unnerving enough when you're used to it. So we only went down with a handfull. 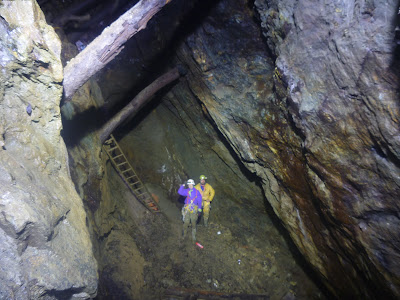 Corinne and Rick at the bottom of the first pitch

We gathered initially in a level just a meter or two above the half-flooded level. If you have to wait, you may as well do it dry! And this copper mine still had lots of copper in it; on every iron surface it tended to precipitate, which resulted in very pretty colours and shapes. 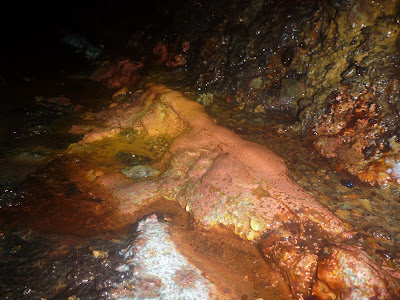 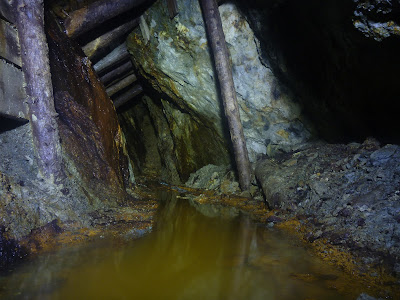 The level we gathered in


When we were all down Lionel inflated the boat; we knew the lowest accessible level would have water in it. And we had a boat; might as well use it! He and I went into the level as far as it would go. Fun! I had a nervous moment when I realised that where the level got so narrow the boat couldn't go further coincided with the timbers being very, very dodgy. The only way of gettign out of there was pushing off against that rotting woodwork. But it didn't go wrong! I did decide to try and go back on foot; you're a bit more in control that way... 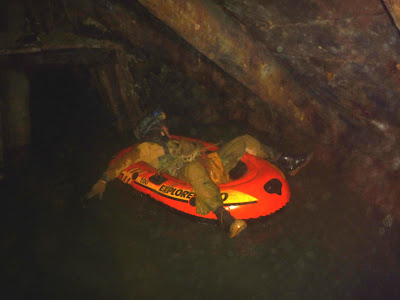 Me making my way to the timbered level behind me

When I came out we had started to go back up. Lionel, however, found out you could go the other way too (after a bit of digging); we tried that of course. That way we got a few more tens of metres of mine exploration fun. But then it sure was time to go back up. I was the last. When Lionel went up I had a look at "my" bat; to my delight he had by now decently folded up! He looked much better. I hope he makes it!

Being the last, I brought the rope and the rope bag up. When I reached the surface and clambered out, Rick asked me where the frog was. I had no idea! He said he had put in in the rope bag, and sure enough, he retrieved it. It happily walked into the forest! That quite looked like one successful rescue. I hope it was two!
Posted by Margot at 16:18