It's that time of the year again! After the professional Xmas do's (I even popped by at the Marine Institute do for half a hour) it was time for the Caving club events. The Plymouth club tends to celebrate underground. This year we kept it low key. Venues of earlier celebrations like Wheal Fanny and Old Gunnie were decided against as the former is too much hassle and the latter would probably be too flooded in a week like this. So we went for an abandoned railway tunnel.

As one of us did his usual getting-lost-routine we decided to go in in two groups. Two of us waited for the latecomers while the rest went in. We walked all the way through. It's not far, and though it's fairly monotonous it's an impressive tunnel, so I don't mind. I mused about the trains that would have thundered through as late as 1966... One of our Daves had even been in one!

On the way back we found a spot with little dripping water and little garbage (these tunnels attract lots of fly-tippers, apparently). We had hoped we would have met the latecomers by then, but no sign of them. And no signal in a tunnel! So we unpacked our bags: quiches came out, and samosas, and pickled eggs, and mince pies, and whatnot. We even had some tinsel, tea lights, flashing Xmas hats and such tack. A modest, but nice celebration! Fortunately, after a while we did see some lights in the distance. Five more people! Now we were complete.

When we were done we walked to the end again, as not all of us had seen that, and then we walked back, with a camera at long exposure times aimed at us. I was hoping the pictures would have come available by now, but alas. I know they're beautiful! 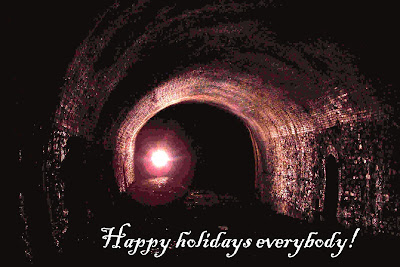 My wish on a picture Dave took a few years ago

Two days later it was the turn of the Cornish lot. That was a much less  acceptable celebration; that took place not only above ground, but even in a bowling hall. I admit it. I went bowling. It wasn't my idea! It seems that they always do that to celebrate the end of the year. Strange habit; over-eating underground seems so much more appropriate.

It's far, and I wanted to finish stuff before the holiday, but I was chanceless against the charms of Mark, the organiser of the whole thing. And as Dave wasn't going, and Lionel would come from the west in stead of the east, I even had to go alone. And I don't like driving! But it was a good opportunity to test my brand new clutch and gearbox.

To my surprise I found it in one go. A somewhat depressing venue, were it not for the people in it! The Cornish are a lovely lot. So after an initial lasagne I obediently traded in my boots for bowling shows (no steel toecaps, to my surprise) and took my place on lane 1. And hurled some balls in the general direction of the pylons, or whatever they're called! I am truly rubbish at it. 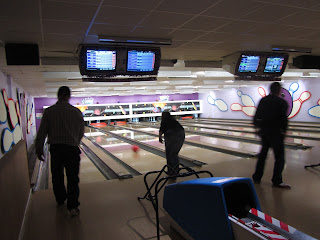 Even the Cornish were keen on going home at a reasonable time, so when I decided to abscond at 21.15 I wasn't even the first. I am glad I went! Although that bowling malarkey isn't my thing...

Have a great Christmas everybody!
Posted by Margot at 21:38