Celebrating Sinterklaas with non-Dutch is perhaps even more fun that doing it with the Dutch. (And the Belgians. Germans and Poles, who celebrate it too.) Our Dutch PhD student wanted to share Sinterklaas fun with her colleagues and invited a lot of us to an evening with food, drink, presents and poems. And we were keen! Two of us couldn’t make it, but there were still 9 ladies (our only men had dropped out) gathering on December 5th. We were three English, two Dutch, one northern Irish, one German, one Spanish, and one Syrian lady. We had all brought something to eat and drink, and it was quite jolly! But that was only the beginning. When we were all satisfied it was time for presents. 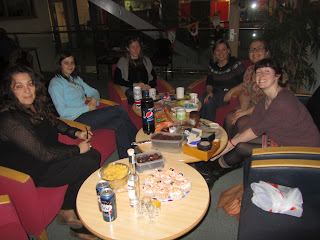 Six of the participating ladies ready for some Sinterklaas - and notice the bunting! 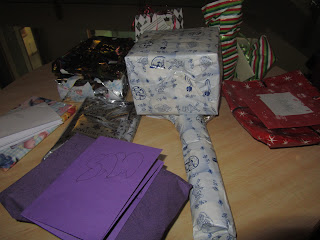 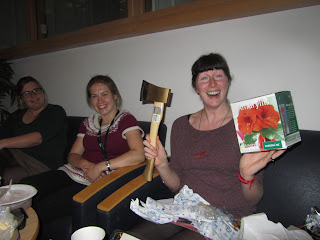 Most of us had never made a Sinterklaas poem. But all did really well! Instinctively everybody hit the right balance between being nice and taking the piss; Hoayda was laughing so hard she couldn’t read hers. What I found funny was that several poems mentioned Christmas; for us Dutch it's so evident Sinterklaas and Christmas are two fundamentally different things! But it's true; from the outside it's less evident. And not only the poems were good; the presents were very imaginative. One lady had just moved to a house with a wood burner and got an axe.

We couldn’t possibly finish all the cheese, but we managed to finish all the mulled wine. Next year I won’t be there anymore to celebrate along, but I think it caught on, and Sinterklaas will visit again. It was a good night!
Posted by Margot at 16:53