If you have money to spare, maybe better give it to cancer research or something like that. The chance of your few quid saving a life are bigger! But as it is foolish to only pay attention to the most important, and none to the somewhat less important, I answered a call form the cave rescue team to go fundraising. The shop "Go Outdoors" supports mountain rescue, which we are a part of, so we have an agreement that boils down to that we sometimes come in in our oversuits, and then man the climbing wall they have in that shop. Every (parent of a) climber is asked to donate at least £1. And people are quite free to give money without climbing, too.

I was part of the Saturday morning team; it's a quiet time. There weren't many people in the shop in the first place, and of course even less who were interested in the climbing wall, or in us with all our kit. So some of the time was just spent chatting and drinking coffee. But we did get three young boys who wanted to give it a go! One wonders if only boys accompany their parents to outdoor shops, or whether only the boys fancy a climb is hard to say. We did see some girls who were old enough (there was no minimum age, but there was a minimum height of 1.20m), but none of them fancied a try. 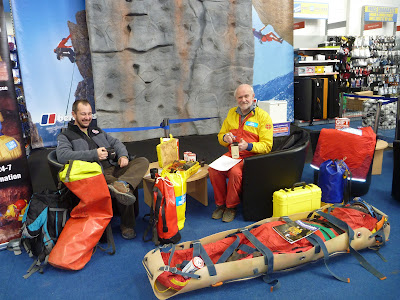 With nobody wanting to climb we had to sometimes just sit around and drink coffee. It could be worse!

The first money we earned was some change donated by nobody other than Rob! I was surprised to see him. He had just come out of the gym with his crossfit friend, and popped down to buy some tape. That was a nice surprise!

I don't think the three of us managed to raise more than £5 in a whole morning. And that would be around 50p per person per hour; that makes the whole exercise a bit odd as it would have been so much more efficient to each just pay a few quid and spend our time on our expensive selves. But it's not just about the money, of course. I don't think we'll be able to buy a new rope (just to name something) from the results of our efforts, but we've shown our faces, and that's worth something too!
Posted by Margot at 13:21