Two yawning men and a bouncy girl in a car. The car pulls up at a seemingly random place along a country road, where an old Land rover is already parked. Another yawning man emerges from the Land Rover. What other could this be than another tale on caving? Or, to be more precise: on mine exploration.

Two earlier trips had resulted in a rickety bridge over a shaft, and very wet and filthy caving kit. We were now ready to cross that bridge! Or rather, I couldn’t wait, but I had gone to bed early the night before, and had managed to dry my caving kit since the previous trip down. The same could not be said about the men. Unhappily they wrestled their tired bodies into their sloshing kit... 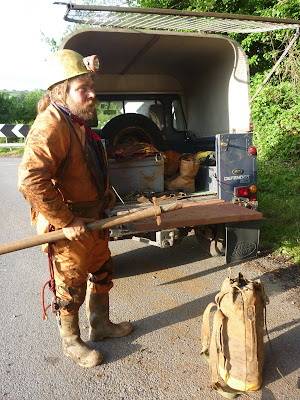 This was the state Rick and his kit were in BEFORE we went in...

In no time we arrived at the shaft. I tied myself into the rope, and was eager to cross that barrier between explored and surveyed terrain, and places where no man alive had ever set foot. Brainstorming by the men on how they would draw the bridge back as soon as I was over, and only put it back in place after I had given my bank details did not distract me. And soon I could go! I quickly crawled over, hearing Dave behind me say to Rick “I told you she was mad!”. It was then time to get the men over too. All of them were moaning to some extent, especially Dave, who sounded like me in a traverse, but they all came over safely. Almost safely, perhaps; I noticed that the somewhat robustly walking men made the floor undulate... was it wood we were standing on? Centuries old wood? Time to bugger off, see what was beyond! 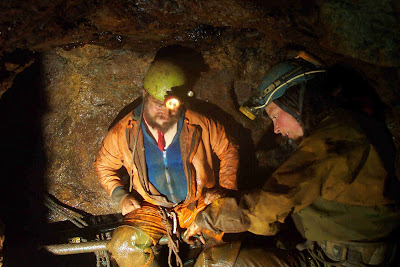 Me tying into the rope 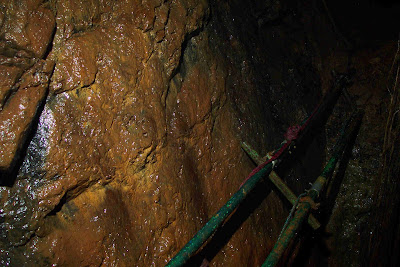 The bridge! A beauty. Below it a nine metre shaft. 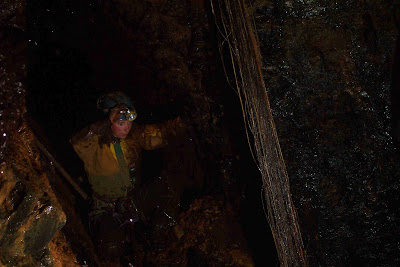 Me on the other side! Notice also the lianas in the middle... we almost had to stop Lionel trying these as a means of transport the first time we came here. 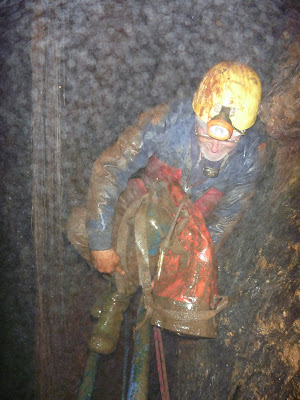 Ali making it across too 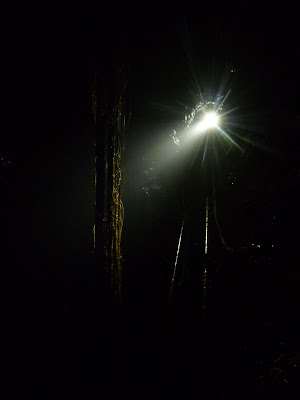 That search light is Dave's head lamp. On my request he was willing to shine on the lianas, colloquially known as "the vegetable". The two runners of the bridge reflect below it.
The floor didn’t give. We walked on through the old tunnel to a Y-junction, with beautiful structures on floor and ceiling. The first were doomed, the second at risk; we tried to make sure we took photographs of everything before we ventured on. And the tunnel on the left did not leave much to venture; it came to a dead end. We made sure we properly surveyed all of it, so we spent quite some time in there anyway; then on to the right tunnel. The same features: a dead end, but quite some surveying time. And then there was nothing other to do than go back, surveying and taking pictures on the way! A modest exploration, but one has to start somewhere. And this had been great. 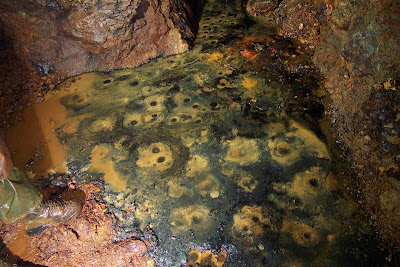 A floor nobody had walked on for a hundred years! The dripping stalactites had made pretty structures in it. But we had to walk through to get into the right tunnel. When we left it it was homogeneously orange... 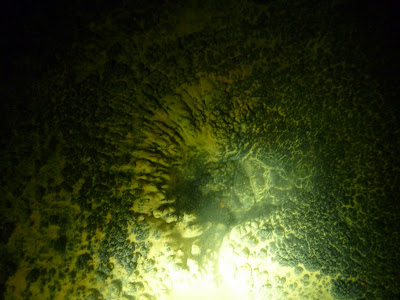 One of the little "ponds" in close-up 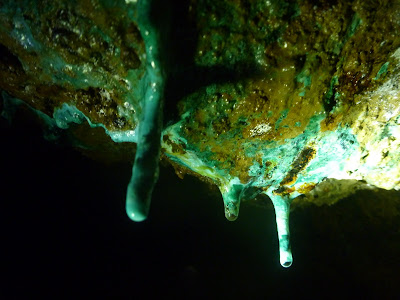 Most of the straws and stalactites were rust-coloured, but here we had some copper-blue ones!
We crossed the bridge again, defied the mud, and came back in a more civilised place. There was a stream there, and Ali and I took the opportunity to clean up a bit. He took off his oversuit and dragged it through the water; I just laid down in it (both sides) and tried to scoop water over the filthiest bits. And then we walked back. Still in the stream I suddenly heard “ow, bugger, ha ha!” behind me; Ali had stumbled in the stream, and fallen over in his undersuit. 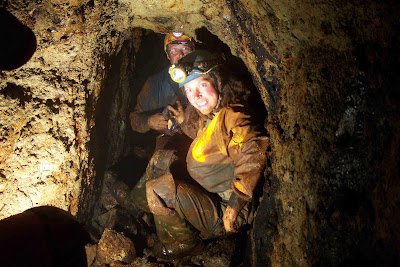 A break in the surveying work. Notice that Ali is holding a measuring tape. And for those who wonder why I look pregnant and locally bright yellow: I was carrying one of Dave's flash guns around, but as I wanted to keep my hands free I had stuffed it inside my cleavage. And I hadn't switched it off... Dave wondered if he could trigger it through the suit. Lo and behold, he could... the effect is modest, though, due to another flash gun pointed at me also going off.
When we approached the cars we were greeted by mud flows having their origin in Rick’s boots. We were quite filthy indeed! Even after the stream. But we figured we had a chance of charming the landlady of Chipshop into serving us a late beer, so we threw off our wet muddy kit, jumped into something less appalling, and raced to the pub. And the plan worked!
In the pub we discussed possible future plans, and why I could so happily cross a shaft while a traverse makes me shit seven colours in a spiral. For me that’s logical, but the men were puzzled. Anyway. Perhaps this specific trait will get me invited to more of such crazy adventures! I sure hope so.

So you have become a caver-lunatic indeed. I like it!