Four intrepid explorers gathered where a week ago fourteen people had amassed, and a while later we were back in Elbonia. And the scene that then unfolded was indeed not necessarily enticing to all. Uncomfortably we dragged lots of heavy stuff through the thigh-deep gloop in the low tunnels, having to crawl in places. Soon there was no difference anymore between the green and yellow parts of my oversuit. And when all was at the desired location we could set to work. Picture four filthy people in a damp, stuffy, confined space with several decimetres of mud on the floor, trying to piece together a steel bridge, and make it span a shaft. Sounds like what you would want to do on a sunny Wednesday evening? It is for me! 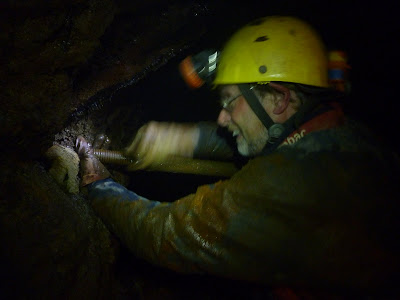 We started with a thingamajig we could jam into the wall; this would be our safety beam. Strapped to it we could perform strange, but thus non-perilous antics. And we set out to assemble our makeshift bridge. That was the easy (though fairly time-consuming) bit; making this heavy construction span the shaft would turn out to be the challenge. While Rick and Dave displayed their construction skills, Ali took advantage of the situation by surveying the as yet unsurveyed parts of this mine, with me as an assistant. It's a straightforward exercise, but it can get complicated if your measuring tape and your notebook get covered in a layer of mud. Surveying a salt marsh is much more straightforward...
When we were done we checked on the men, who were done assembling, and had the bridge almost over. With all our muscles and body weight combined we managed to achieve some almost satisfactory configuration, but the hours had gone by, and by now the pub was beckoning us. Being the lightest of the four of us I had stayed away from the epicentre of activity, but now I had a look, and I decided that that bridge was good enough for me. But first things first! And the first thing now was to get the hell out of here, get out of the muck we mistook for outfits, and make a glorious retreat to a pint of ale. And so we did. I was glad I had some water with me, for the idea is that when I get out of my caving gear what appears is white skin, but this time the dominating colour was dark brown. Luckily the pub we were headed for is used to cavers; the landlady does not even blink if her customers come in looking like, well, they have been taking a several hour mud bath, as we had.
From behind our pint glasses we made the plan for a follow-up. Two days later we would reassemble; I would have the honour of crossing, and then pull the bridge into a more stable position, after which the men would cross too. I can't wait! And by sheer coincidence the next day the School of Geography, Earth and Environmental Sciences had an awayday at the Mountbatten Watersports Centre, where Ali was about to teach kids climbing or sailing or whatnot, and where he informed me there may not be much beyond the shaft, but perhaps there was more to explore in the shaft itself! We'll see what we find. I'm all excited!
Posted by Margot at 17:07