One mine for the road

If you fly to Norway on a Tuesday you miss the weekly caving trip, and that may even be a good thing. Caving is fairy risky, and one may have grave responsibilities in Norway (hence the trip there), and beside that; one does ot leave behind a whole house full of muddy kit that way.

But it doesn't always work out that way. Imagine for instance a man called Finbar developing a desire to visit a specific mine, outside regular PCG activities. He may pick an Monday! And who could resist such a trip, even if it is on your last night in the country. Just a few die hard cavers, including even some Tamar Moles! So what can I say. I went. And I did have visions of me busting my knee so bad I could not drive back to Plymouth from Tromsø with Rob, and sentencing him to do that entire distance alone, but I also discarded these visions as expressions of fears better overruled.

The entrance was an inclined shaft, and I was first to go down. It took me ages! The rope was not very slippy, and my stop is not very worn, and for a caver I'm not very heavy. I had to try very hard to move! But I made it. And hardly more than seconds later Ali was down as well. He was clearly in it for surveying, and asked if I would mind giving him a hand. Well, no, so off we went, into the pretty mine An amazing specimen as well, for crap field geologists like me! For some very obscure reason, someone had indicated all geological units in spray paint... then even I can make sense of it! 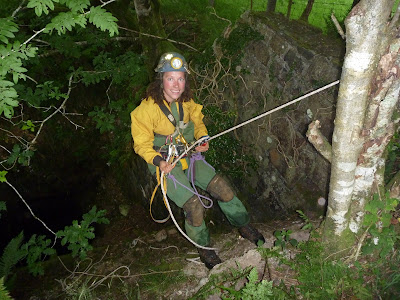 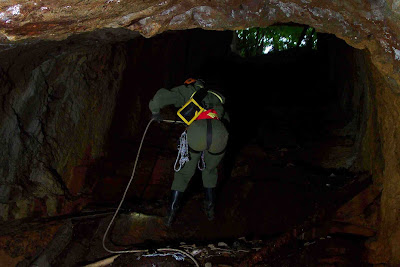 Jenny in the inclined shaft 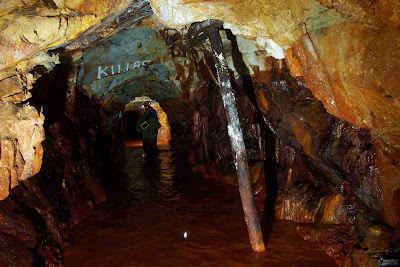 An example of the spraypaint geology: "killas" is a specific type of metamorphic rock...
Ali ran away in a seemingly arbitrary direction. Maybe he wanted to compensate for the fact that Lionel hadn't joined us. In no time he was standing far away from any sign of the others, in cold, crotch deep water. It would be one of those days. And surveying is a game of standing still, and I was not dressed to that. Furthermore, I thought it was a bit of a waste to go caving with such an exquisite choice of fellow cavers, only to stand all alone in a tunnel with a laser distance meter in your hand. So after an hour I demanded to give my task over to somebody else. Dave had vanished with some flash gun assistants, but Bob the Archaeologist, Rick of the Muddy Digs and Finbar Without Epithet conveniently walked by, so I gave the pimped laser pointer to Bob and let Rick take me on a small sightseeing tour. A pretty mine! 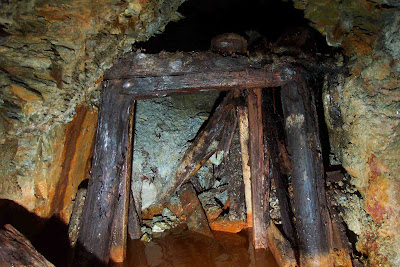 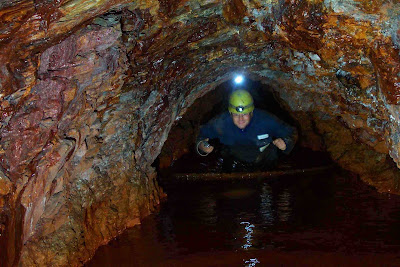 Bob
Having eight people climbing up that shaft would take a while, and people were getting cold, so we decided soon to start making a move. Finbar had such cold hands he could not get into his harness without help, so Rick rigged him in while I romantically held his hands in an attempt to tackle the cause of the problem. And a rope can hold two people, which makes things much faster, so when that was done Finbar and I decided to go together. There was lots of loose garbage in that shaft, which you could easily kick loose, so we had to stay close together. We discussed who would go on top, while Rick commented on the countless opportunities for cheap innuendo caving provides. I decided on the man on top. 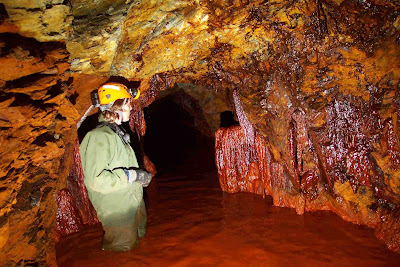 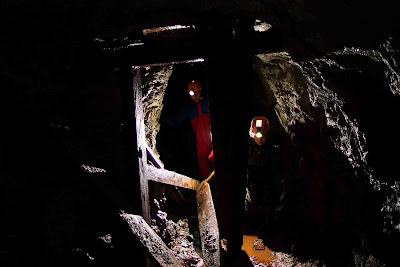 (All pics by Dave, unless stated otherwise)
We were a good team! Some more innuendo was created by Finbar slipping several times on his rubber boots, and the best way of assisting someone with that problem being pushing them in the bum, but we came up fast and well. There we had the somewhat bewildering situation of Finbar grabbing his hand ascender, which is attached to the central lock (is that a Norwegianism?) of one's harness, and illustratingly holding it into the air, saying "the problem may be that my thing is too long!" I then grabbed mine, and had to concluded it was even longer. Caving brings out the testosterone, to embarrassing heights.

In the bar afterwards Bob shocked us with his announcement he had accepted a job far away- he's leaving us! When I just thought he would be joining us. There goes the biggest caving treasure trunk of mining archaeology knowledge. May he be happy in the new job! The good news is, though, that Rick IS joining us. Bring on the mud! In large amounts! And on that note I'll now switch to Norwegian salt marsh mud. I'm blogging this on Gatwick airport: Norway here I come!

ps "central lock" is indeed a norwegianism. It's called the central loop! Makes much more sense.
Posted by Margot at 18:38