The other way around

I blogged it already months ago: Tuesday is Caveday. That is, after all the usual obligations of my university job. But sometimes things suddenly work out differently.


This week’s caving trip was going to be a talk about the industrial archaeology of the Tamar Valley. But on Monday I received an email from Neil, saying he was going to go underground, and if I was interested in joining. Neil the caving lawyer? No! One of our senior professors, who was taking his students to a touristy cave, where interesting palaeo-anthropological research had been done. Afterwards he would take them to a beach for some related palaeo-environmental reflections. That sounded cool! I like going underground, I like going into the field, and I like a chance to have something to do with the students. It’s not in my contract, so anything is bonus.

So this Tuesday morning I arrived on the campus in my quick dry trousers and hiking boots. Good for a day at work, and maybe a bit underdressed for the caving activity afterwards! A strange idea.


We set off in a coach to Torbay. The whole front of the bus was full of eager employees… at the cave another lecturer joined us, and we were complete. This overdose of staff (3 permanent guys) meant we juniors (4, and all female; typical!) would not have to be worried about whether our knowledge of cave bears or shell beds was sufficient; it takes less than three men to satisfy the rather negligible curiosity of 28 students. So it was just a day out. Fun anyway!

In the cave we got the standard tour by a guide. Nowadays it was a tourist trap with some small patches of excavations going on, but in the 19th century it had been the site of groundbreaking science performed by still celebrated regional heroes. And besides being an archive it was also a nice dripstone cave; partially still active. 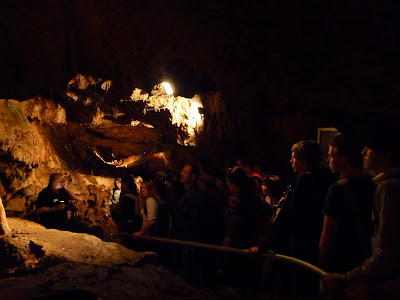 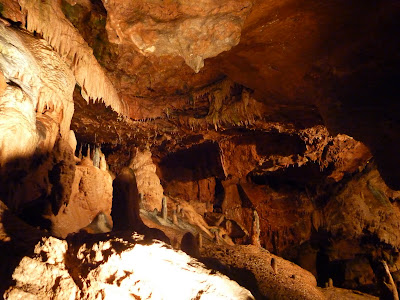 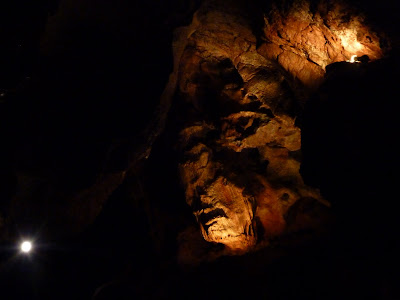 The "face" in the wall 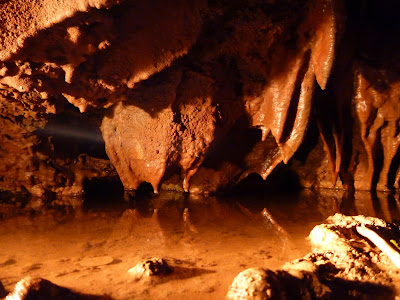 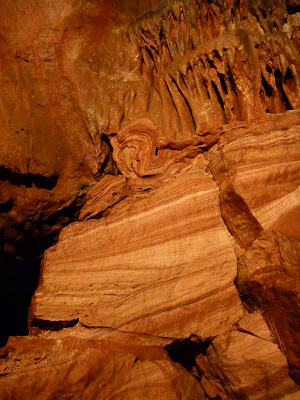 The archaeologists had dug right through a thick layer of flowstone 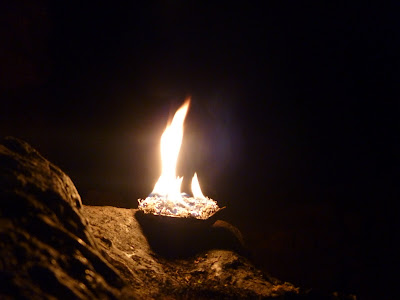 A mesolithic (?) torch!
After emerging from the cave we walked to the beach. The choir of complaints about having to walk very far (several minutes!) and even negotiating some topography nicely confirmed some of my prejudice against English students, of which many had not bothered to don themselves in shoes that consisted of more than some cotton and a trace of rubber.

We managed to reach the beach, though; there Neil’s first priority was finding the specific sediments he wanted to illustrate his point with. I scurried off in some direction too, not finding anything to his liking, but really enjoying the rocky coast and the deformed rocks, and even a closed off entrance to something. A cave, a mine? After coming to a dead end I came back to the group, to have lunch in the sun. Neil turned out to have found his sediments without the insubstantial help of easily distracted people like me. 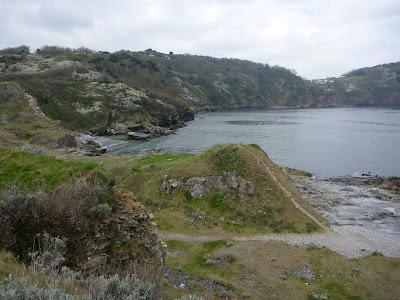 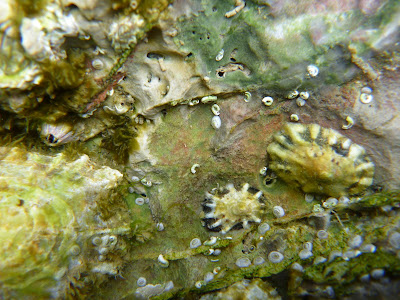 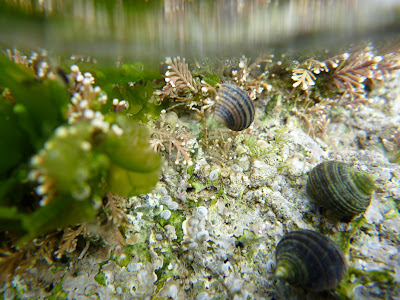 The whole succession of deformed rock, consolidated sediments, and unconsolidated sediments on top told an interesting story of environmental vicissitude on many scales, which utterly failed to entice the majority of the students. Neil did his best, but there is only so much one can do. 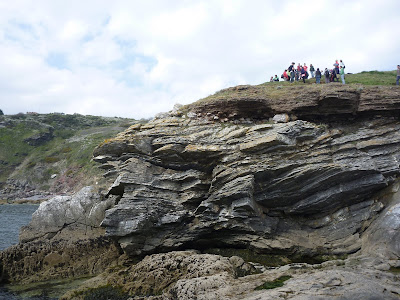 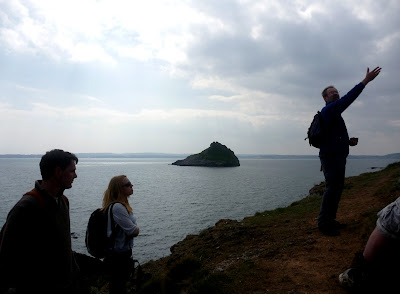 Neil widely gesturing to the students, backed up by two jaded doctors
It was good I had no important role to play, for on the way back I got annoyed by flocks of panicky kids waiting for Neil at any junction on the path. Which way to go? Anything to avoid finding your own way! Maybe you end up walking 10 meters too much! I was happy to leave this inert bunch for a while and take the short route back on my own. But then again, I probably was equally sheep-like as a student…

So what had I learned? Not that much about the students. More likely I learned what Neil wanted thém to learn. But it had been a nice day out!

After a short interval behind my desk it was time to reverse the day. I swapped Neils, and together we set off in the opposite direction. After a nice trip (roof open! Sun and high speed!) we got an excellent talk, and a good pint of Black Prince afterwards. An unusual day, but a good one!
Posted by Margot at 12:11