My house is quite old. But how old? The oldest mention I found in the documentation that came with the house was from the 1880s. But that was in the context of it being in someone's will. It could have been there for centuries before that! In theory. And online old maps tended not to go back further than the 1880s so I knew I would need to look elsewhere to find out. And the place to go would be the county archives in Caernarfon.

One day in August I decided to just go. If not now, then when? Soon term would hit. So I drove up and walked in. There was a desk with two people who were willing to help. A man jumped up and pulled out an old OS map. It was on there! I knew that. The oldest OS map they had was from the 1880s. So their maps wouldn't tell me much. But they had census data! He showed me how to find what I was looking for. Soon we had found the house in the 1901 census. It had a mother and daughter in! At least, I think it did. I know the house number has changed (from 14 to 13) at some point, but I don't know when. But I noted down who lived in the adjacent houses so as soon as I pin down the number change I know for sure. 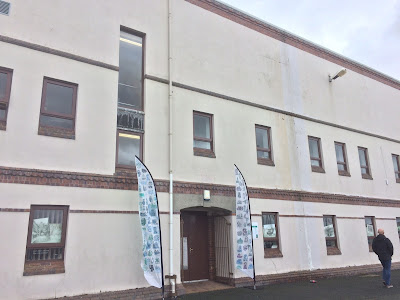 Then I looked in the 1891 census. That was fairly straightforward! With the same disclaimer as in 1901, it looked like it them housed a couple and a lodger. Success! Next: 1871. And again: success! A couple with a lodger. So the house was already there! I figured as much. This was going well! 1861 here I come.

There trouble started. The census is done by parish, and every parish is subdivided into districts. They change these every time. My house is in the parish of Llanllechid; I suppose as that village is a lot older than Bethesda, which nowadays has pretty much eaten it. And that parish had 14 or 15 districts back then; four were missing, and I think my street was in one of these. Bummer!

In 1851 I was glad to find the High Street in the census data. Page after page of High Street. So if the High Street was already there, my house probably was too. It would make sense building that area up in one go. But that's no more than a guess! So I was disappointed when then the street names vanished. Altogether! So maybe the house was there. Maybe not. Impossible to tell from this record!

In 1841 Bethesda was mentioned as a 'hamlet' and no street names were given at all. So probably the house was no there then! Which gives me the working hypothesis that the house was built between 1841 and 1851. But I will have to come back and check things such as tithe maps to verify that hypothesis. I hope to find out more! And I should also make an overview of the information I have in my own archive. As is, it's just a pile of paper, and that's not helping. I should have an overview of inhabitants, changes in address, area (addition of the garden, for instance) or things like that, and even price would be cool to record. More to do on this topic! And I'm sure it'll take a while but that's OK. The house has been there for at least 150 years (yes I only have evidence of 148 years but I'll take that bet) so hurrying things might be in character with the nature of the quest!
Posted by Margot at 09:21