I enjoy Laugharne! Fieldwork is fun. And it's nice to live with loads of people for a week or so. Especially these people! I think we're a really harmonious bunch. But being home is nice too. I can do things my own way again! So what is it I do at home which I miss in Laugharne?

My bread machine; no comment needed I think. I haven't bought a single loaf of bread since having bought this thing!

Having dinner at a reasonable hour; in Laugharne, we often eat by the time everyone is ready, and that can be late. And most people eat quite late anyway, even if there is no logistic reason for it. But I don't like dinner being so late you already want to go to bed before dessert is served. It's not nice to have things encroach like that, and going to bed with a freshly filled stomach isn't nice either.

Having smaller dinners; cooking can get a bit competitive and there's always dessert, which I don't do at home. So the food is better than I make it myself, and often you just get a plate in front of you of which you did not control how much was piled on top, so overeating is easy, and then comes dessert. So overeating is VERY easy! And of course you can insist you serve your own plate but I don't like having to fight for that sort of thing. I fight for my right of self-determination regarding what I eat in the context of the ThursdayNighters (as that is not a yearly one-off) and bloody hell is it a drag. It should happen naturally.

Doing my morning routine; in the morning I start with pull-ups, ground exercises, and push-ups. But in the chalet park I have no pull-up bar, and my bedroom tends to be too small to fit other exercises in. And yes I could do them in the living room but I'm still too self-conscious for that. I was already mocked for even saying I do such exercises! Imagine if I actually do them in public. And I know, if I care so much I could just do it and let everyone just have their opinions about it without that affecting me but I'm not yet that zen.

But being in the afore-mentioned company, in a different and pleasant environment, getting my hands on mud and doing more runs than I do at home more than makes up for that! 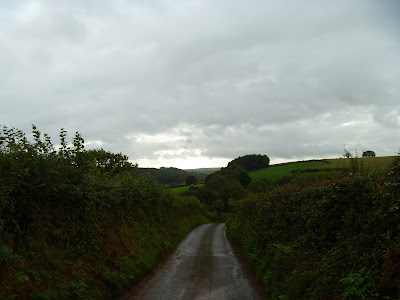 The landscape around Laugharne