On the Monday, we would all go into the field together. All students, all academic staff, and then two technicians for good measure. It sounded good! The weather forecast didn't, though. Beforehand, the forecast was heavy rain and thunder pretty much the entire day. But when the day came closer things got better. There was still heavy rain forecast, but no thunder anymore, and no rain in the afternoon. So we just packed our waterproofs and went anyway! With thunder we really didn't want to be in the estuary, especially as Martin wanted to deploy some instrumentation fixed to a scaffold pole. Not sure lugging one of those around on a flat area in such a good idea when there's lightning around. We still had to go in the morning, though, as we needed low water and that was at 10AM.

We walked onto the marsh in OK weather. But it started raining at our first stop. We wanted to sample pretty much what I want to sample on my own day out in the field: high marsh, tidal creek, low marsh, mudflat, sandflat. Although now we also wanted to sample the actual channel. I don't bother with that! But we talked the students through how to sample, and how to describe their samples. I reminded them that we would take a sediment core later in the week; it was important they looked at the sediments with an eye on being able to recognise them in that sediment core. 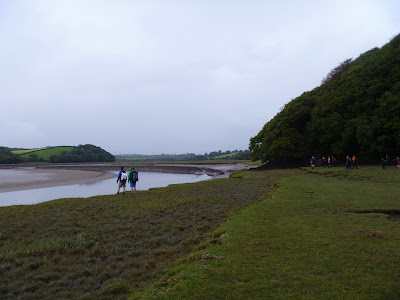 From the salt marsh we went onto the mudflat. That is always funny with a sizeable group! There are always people who are not so good at negotiating these. But we got through without incident. We scooted over without taking samples as we needed to deploy Martin's equipment close to low tide, and we also needed to cross the channel. That's also a low tide thing. The mudflat would remain exposed for a while! So we went to the sandflat where Martin did his spiel. And then we crossed the channel. It was only knee deep! I went with the rolled-up trousers option.

On the way back we took the mudflat sample. That involved so much standing still one student got a bit stuck. It took a while to get hm free, but then we were OK for going back to the vehicles. We were all getting hungry1 And some people were wet and cold. It had been a good morning considering the weather! It had rained for about half the time. And I think we pulled off the Jaco-free sediment day! 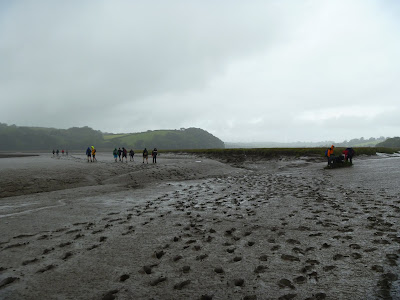 Both the weather and the walking conditions got worse! Notice the clump of students tightening their shoe laces in a patch of Spartina.


When we got home I didn't bother with washing the mud off or changing: I had Welcome Week to attend to. The freshers get assigned a Peer Guide, and then freshers and Peer Guides can get in touch with each other and everything starts to come together. As not all peer guides had appeared on the site yet (the allocation is done digitally for the first time this year) I had not wanted to do that before leaving. But people were getting restless so I had to make an executive decision. There was one peer guide still missing! I allocated freshers to all others, and just mailed her students her contact details. That would have to do!

When that was done I took the liberty of updating my blog. I tend to do that over the weekend but I had had no weekend! In the meantime it rained cats and dogs - so much for that dry afternoon.Poor people doing CTD measurements! But it didn't last, and it was dry when I later went for a run. And had a shower. And then went through the surveying information again until it was dinner time. We had bangers and mash! Very British. And after dinner it was soon bedtime. Third day done!

The next morning we were suddenly nine instead of seven: the geophysicists had arrived after I had gone to my chalet. They would join in the surveying, and then do geophysics until the end. So we all got ready in the morning to do a transect, including me, for the first time. I have surveyed lots of marshes before but generally with DGPS, not theodolites! But I am actually more the theodolite person. I like low-tech.

I had a group of three blokes and after Suzie reminded all three groups who had travelled together of surveying basics, we each went to the start of our transect. We started a bit hesitantly; this was new to me (I was only quite comfortable with the theory) and the men hadn't done this for a while; possibly since their first year (they are in third now). But after some sending the man with the staff back and fro for a bit we got into a routine. And we surveyed up to the channel! I tried how deep it was; less than knee deep. Fine! So we even took a measurement in the deepest part of it. And then we measured all the way to the other side. It was nice weather and jumpers came off! On the other side I had a sarnie. I had one with a left-over veggie sausage from the day before, and I added some samphire to it. Very nice! 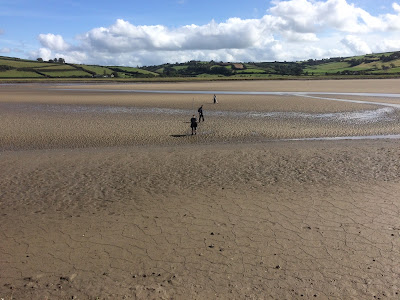 From the other shore we just walked back without surveying. And the channel was only just above knee deep by then. Easy peasy! And Suzie's group was back at the vehicles at pretty much the same time. And the third group joined soon after. We were good to go back! And then I could fill the afternoon with more freshers stuff (more peer guides on the site, more freshers, inquiries from Head Peer Guides, and whatnot), and some general faffing. And then it was dinner time again! Suzie cooked something lovely. And in Laugharne, after dinner comes bed.
Posted by Margot at 09:33