We were going back to Holyhead Mountain. You never know what you will get if that happens! On the parking lot I met Glyn and Eifion. More people seemed to be on their way. We went ahead!

Glyn wanted to do a specific route and he immediately tried to rope me in as his wingperson. That should have sounded some alarms! If he wants me then nobody else wants to do it, and there may be a reason for it. But we just walked up. We started at the cliff with Glyn's desired route on it. It didn't look too bad! I suggested I indeed belay him and second the route, as Eifion wanted to go elsewhere and climb other routes with those coming later. That meant he should be able to scoot off when they would appear. Eifion was visibly relieved when I said that. Another sign on the wall!

Simon and his youngest daughter appeared, and together with Eifion they went to another crag. Glyn got ready to start!

It was clearly harder than it looked. He groaned and struggled! That would be interesting. He struggled over the crux and vanished from sight. The route went over an edge so we wouldn't be able see or hear each other for a while (except from when shouting really really loud).

I heard the 'I'm safe' call, and a while later I saw the rope be pulled up. Time for me to get climbing! I had put on my climbing shoes and slung a bag with our walking shoes onto my back. Then I started! The first two meters or so were OK. Then it got hard.

I got to something that wasn't even a crux and struggled. How to get past this bit? I figured I couldn't do it. And I was very low on the rope, so if I managed to get a few decimeters up the bounce in the rope would let me down straight again. Frustrating! But what was the alternative? I couldn't tell Glyn. The others were somewhere far away too. I had to keep trying! So moaning and groaning I tried it along the left, along the right, every way I could think of. And in the very end I managed! Then I was OK for a while. It was still hard, almost every step of the way, but I moved.

Then I got to the crux. By then my muscles were very tired. The same scene as before followed! A lot of moaning and groaning and a million attempts but in the end I got there. And when my head popped up above the edge I heard Glyn's voice. I could see him! And he said it was almost over. And it was.

I did the final (much easier) stretch and joined Glyn. It had taken me almost an hour! It was time to de-rig, change shoes and walk down. It was getting dark so we wanted to get over the boulder field quickly. Once on the path we would see if we could spot the others. But we didn't see anyone! We phoned Eifion and he said they had already buggered off to the cars. The cheeks! So if I really wouldn't have made it they wouldn't have been there to tell Glyn and sort something out. Oh well. I managed! We walked back too.

I was tired and bruised and smelly but I had managed! And Glyn had on-sighted this route he really wanted. So even though we had done only one route it had been a successful night! 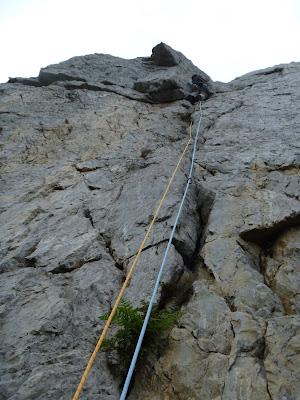 Glyn just below the Crux 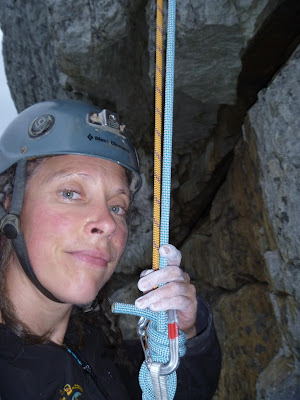 A tired smile at the first difficult bit 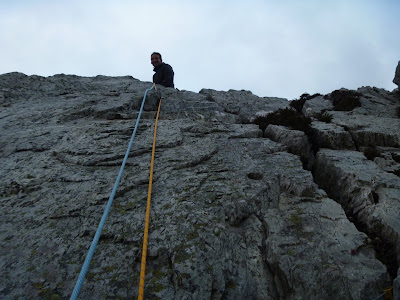 Over the crux! Glyn is in sight. 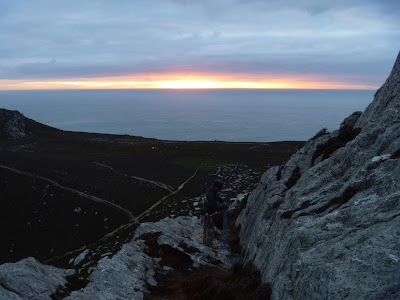 Glyn tidying up the rope in the sunset
Posted by Margot at 15:16