Climb in the rain

The weather was nice! In Menai Bridge. So all looked set for a night of climbing. We would go to the Sidings, in Dinorwic. I got there and the sky looked ominous! Catrin appeared too, and she wasn't too sure of things. But we were there now; better run with it! Piers, Charlotte, Glyn and Kamal appeared too, and we decided to give it a go.

We walked up. Dinorwic is always beautiful, but under threatening skies it's even better. I was having a blast already! And when we got up to the desired level, Glyn and Kamal ran off to do a five something. I decided to try to lead a four something. Catrin and Charlotte did an easier 4 in the corner. 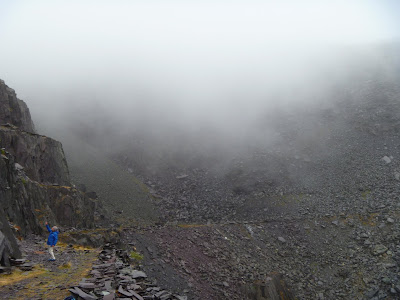 It was only a four, but it was a bit iffy in places! And it had started to rain. That never helps, especially on slate! I found one move a bit scary. Catrin offered to bring the rope up to the next anchor with the clip stick. I accepted that! But I had to come down for it. It did help, though! With the crux secured I climbed it to the end.

By then Glyn and Kamal had taken their route down; nobody would want to try it on wet rock. But my route was still doable! So both Glyn and Kamal climbed it too. The four in the corner was dismantled too. And when that was done we packed up and left. Too wet! But I didn't regret trying it! 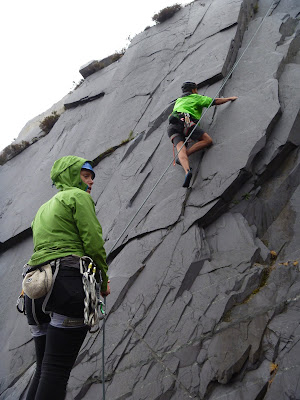 Glyn on the wet route 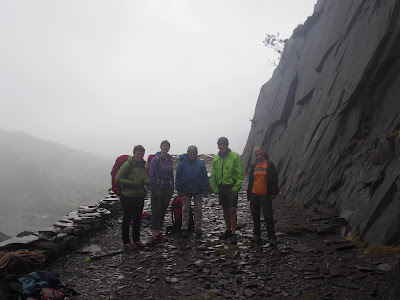 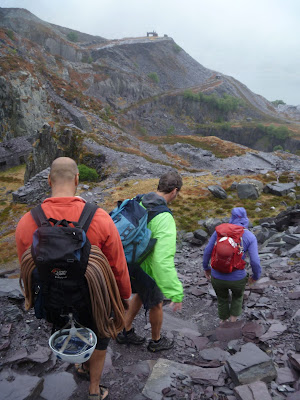 Glyn suggested a swift half in Llanberis as it was still early. And we went for it! Quite nice! And let's hope next time the weather is kinder on us. But Dinorwic rarely disappoints!
Posted by Margot at 08:45