Get rid of the sofa

One fine day I was at a barbecue in Tromso when someone asked me if I wanted a sofa bed. Eh, well, yes! They come in handy, don't they? And it did. I had it in Norway, in Plymouth, in York and in Menai Bridge. Many a guest has slept on it, and I have spent many a happy hour sitting on it reading a book. But when I bought the house and found out my comfi chair didn't even fit into the living room I was sure the sofa's time had come. But what to do with it? I phoned Antur Waunfawr, a company whose aims I support, and they agreed to pick it up. I had asked them to phone before actually showing up as I didn't want to spend hours in a house that's empty apart from said sofa. They didn't, and we had to reschedule. When they then showed up after this time phoning me, the man went looking for its fire label. A fire label? That's a British thing, and this isn't a British sofa. Couldn't they have mentioned that before? A lot of time had been wasted.

I plonked it on Freecycle but time was short. I would pop to the Netherlands, and my sister would visit, and all of that would take time away from possible sofa exchanges. Two persons showed interest but nothing came of it. It was starting to get stressy so I decided to just go try to stuff it in the car and chucking it. I went home on a hot Thursday and lugged the thing out of the living room. I couldn't get it out of the front door, though! And then I tried the back door. That didn't work either! I even started to damage the door. How did that thing move in and out of all the addresses it has been? I gave up. The dump would close at 4PM and I wouldn't make it anymore. I left it in the kitchen and I figured I would have to go back, disassemble it, and try again. The letting agency would have viewings the next day! Can you leave a sofa in the kitchen? And I was getting fed up, I wanted to get rid of the thing. But it was Thursday, so I went back to work to tell David I wasn't coming that night. Stuff to do! 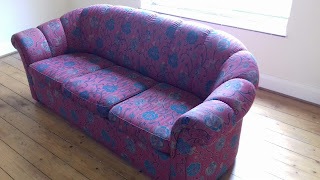 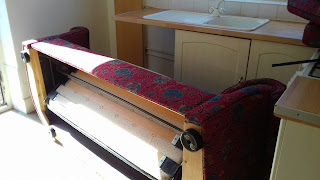 The sofa as I left it in the kitchen

To my surprise I found Paul (of the Thursdaynighters) in David's office. David offered to help with the bloody thing. I figured we had a chance of getting it out if we brought a screwdriver; the sofa stands on stubby feet, and removing these would make it about one inch smaller. Might just be enough! And It was! We plonked it in David's Landrover. He and Paul figured they could get rid of it at a different dump that was open later. I tended to the door.

Later that day I saw them again at the Cwmorthin parking lot; they had managed to get rid of it! With some effort; a dump employer had decided David's Landie is a commercial vehicle and that he needs a permit. Commercial? How so? And they clearly are more fussy than in Llandygai, where I managed to dump a lot of Rose's stuff with the (actual) commercial vehicle of Glyn the joiner. But well, in the end it worked. The house is empty! I can give back the keys and then all is sorted! And I will only have one house to worry about.