Walk with the climbing club

We're not really a climbing club! We hike too. And Simon, one of the bellwethers of the club, was feeling the pull of the mountains. So he sent out a call; anyone up for a walk on Sunday? And I was! I was looking forward to a while weekend off.

The night before I checked the email (that Eifion had sent; that way it would be bilingual) as I couldn't remember if it said to meet at 9.30 or 10. But then I noticed it said both! It had one time in the Welsh version and the other in the English version. Oh dear. I sent him a text and an email asking which one it was, and went to bed.

The following morning I saw a text from Simon: it was 9.30. OK! I drove down. I parked further up the road; there was a rock there I wanted to photograph as it was geologically interesting. So I did! Then I walked up. I met the others, including Alfie, the dog. He was exceptionally glad to see Eifion. Sweet! He is an enthusiastic youngster. Alfie, that is. There were six of us, and soon we were ready to go!

We did the low route, clockwise. It's not far but it's nice! And the weather was too. And Alfie was ecstatically happy. And I got to practice my Welsh; Simon was the only non-Welsh-speaker! And I did some of my geology spiel. I had been asked before if I could do that for the club. It got a bit embarrassing as Simon had had to learn a lot of stuff for his Mountain Leader qualification, and he was doing his spiel too, but he got everything just wrong. And I tried to be as nice and polite as I could but I did want to correct him. No use spreading wrong information! I don't think Simon minded. 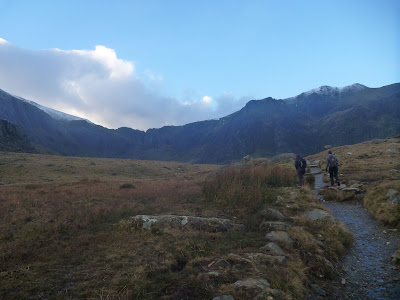 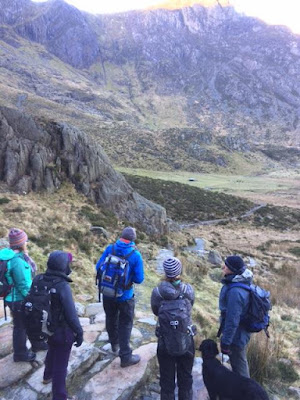 Looking at the head of the valley 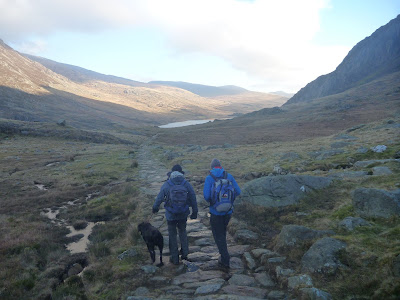 
When we were done Simon suggested having coffee in the sun. We didn't know exactly where to get it but we decided to drive up the old road back to Bethesda, and stop somewhere convenient. And we did! After negotiating ponies, sheep and dogs and even another car on the road, we found a spot. We drank coffee and planned the next walk. I look forward to it already!
Posted by Margot at 07:12