New year, new chances! After some preparations in December I got to actually view properties on the first working day of 2018. It was quite exciting! I would first see the Llanberis property. I got there a few minutes early, and walked around in the direction of Dolbadarn Castle. I'd driven past it many times, and never actually voisited it! And I still didn't as time was running out. But if I buy this property I will get all the opportunity in the world.

I met the estate agent, and with some difficulty he opened the door. I stepped in; it was very cute! It had a lovely fireplace, unfortunately only with a non-functional log burner in it. But one could do something about that. It's clearly old, with thick walls and low doors. And exposed bedrock slate in the corner! How cool is that! And the place is very small; it would be interesting to put everything that I want to put in. And that doesn't have to be all I have now! My current house strikes me as a bit too big. I'm sure I can weed some stuff out and make things fit. Especially if you know where you'll be for the coming years you can get rid of things you otherwise might keep because they may come in handy elsewhere. 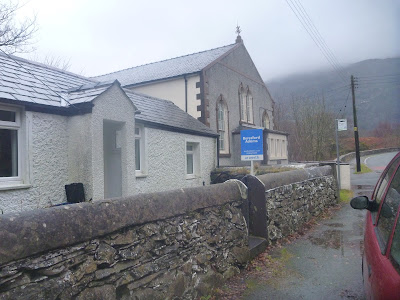 The front of the house 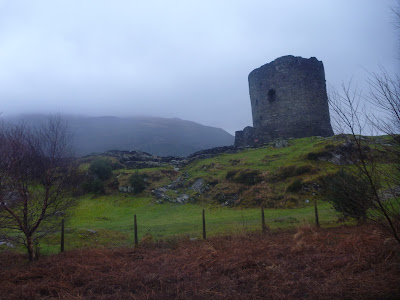 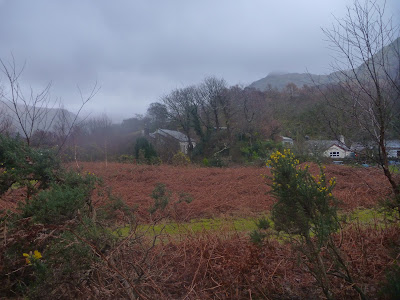 The house from the back; you can't see it but it must be to the right of the chapel


We also had a look at the garden.That wasn't easy! It is higher than the house, and enclosed in an uninterrupted wall. Strange! And it was entirely overgrown by brambles. I climbed over the wall and started wrestling my way through. Suddenly the pictures started making sense! It was a small patch behind the house, then a narrow path to the rear, where it widened out a bit. It was soggy! But clearly something can be done with this. And you see the castle from there.

We had another look inside and then we went each our way. I decided to go cross the road to check the public footpath there; it may be a good running route. And it looked nice! But then I had to go to Bethesda. Along the way I drove past another house for sale on purpose. That one I didn't like! I drove on.

I got to the house at Tan-y-Foel and found a parking space no problem. I met the other estate agent and we went up to the house. It was bigger than I'd thought, and less cosy; it had been done up all spaceous and classy. I like it a bit more unpolished! But it was nice. You couldn't get into the garden other than through the house; I find that a clear disadvantage. You would lug your bike through the house all the time! And your dirty caving stuff. And whatnot. And the location might inspire the use of a moped; on bike it's a bit too time-consuming a commute. But lugging that through the house would really be a pain.

After leaving the house I walked further up the hill; it was beautiful! The landscape immediately opens up. It's a lot of lovely nothing up there. And mines! I'd been nearby before on a walk. 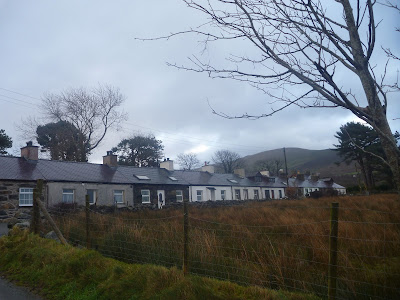 The house from the front (white with green, a bit to the right) 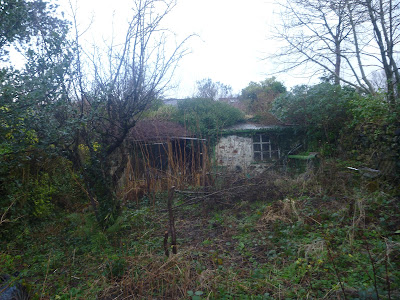 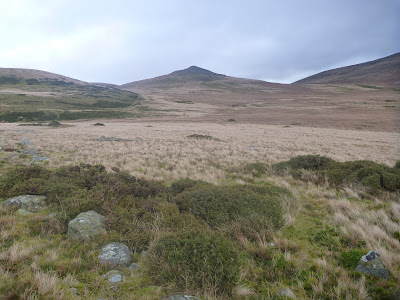 A few minutes up the hill

Then I turned back. On the way back I would pop by Phil, in his new house. He had a lot of work on his hands too! We chatted about houses and doing them up and such things; meanwhile we drank coffee, ate cheese and were generally swamped with love from the dog.

I then had to go back to the office. I had work to do! And a lot to think about. I liked both houses! Clearly the one in Llanberis was cuter. But also smaller. And in a more versatile environment; you have the valley that holds Llanberis Path on one side, Llyn Padarn on another, Llyn Peris in the other, Nant Peris close by, and Dinorwic a stone's throw away. The other house only has Bethesda on one side and nothing on the other. But the Llanberis house is in the middle of a tourist spot and parking would be awful. Then again, perfect houses don't exist!

I had noticed the next door neighbour (not the chapel) was a B&B. On the way back I thought maybe I shoudl one day bike there, spend the night in the B&B, check out possible running routes, and then bike back. I won't commute by bike a lot if I live that far away, but it would be nice to sometimes do it in summer, and then it's good to know how it's done and how it feels. But once home I realised you can't find that B&B on internet. I decided to drive back and inquire in person! And so I did.

I introduced myself to Carol, who runs the place, and she gave me a cup of tea and told me all she knew about the place. Hers had been a temperance society meeting house, and the for sale one had been the stable. It was damp she said, and not easy to ventilate. And it had Japanese knotweed in the garden. And the chimney had been blocked. And the reason the garden was so inaccessible, she said, was that the people of the chapel had blocked it. It used to have a staircase! It needs one again. She said these chapel people were not very nice. But there were only few people coming to the services, and they were all old, so how long would it be a chapel? It was good to know all these inside bits of information!

Very tired I went home. On the way back I felt like I hadn't been home for a long, long time! It had been some 12 hours only. I had been home extremely much the recent days due to my cold. How strange!

I will keep looking for a while but my thoughts keep going back to the Llanberis house! I think I'll phone the estate agent for more information...
Posted by Margot at 15:43