I had started this a long time ago! I have too much stuff and I need to do something about it. And it is a process that starts and stops, but with house moving approaching again it was time for a start in this cycle of  (very modern) decluttering.

One category of stuff that should go were my boots I had used with insoles! I don't use insoles anymore so these boots are now too big. And replaced. And they are still in fine shape to be used and enjoyed by someone else. 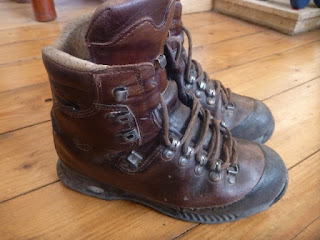 Now that I know I'll be staying in Wales I also decided to get rid of a winter coat I had bought in Norway. It's not usually cold enough for it in Britain! And I also got some stuff ready for the charity shop. The less I have to move the better it is!

I also intend to cheat a bit: I still have quite some work-related books at home but I should bring them to the office. I won't have to move that very often anymore! Emptyish house here I come!
Posted by Margot at 08:43