A bit over a month ago I blogged about Bethesda getting a mural for its bicentenary. And it is finished now! If you come into town over the main road from the coast, then one of the first things you see is this celebratory painting. I think it is amazing! I am not seasoned enough Pesda resident to get all the cultural references, but I get most I think: from left to right you have a part of the cover of the famous book "one moonlit night" (Un Nos Ola Leuad, but I own a different edition); a blondin as were used in the quarry; a generic cogwheel associated with slate production; the sort of card strikers placed in their windows during the Great Strike to indicate they were not strikebreakers; the top of Tryfan, where it is tradition to jump for one rock to another; the chapel called Bethesda, which gave the village its name (before that, the area was called Glanogwen); a bridge over the River Ogwen; and then a gathering of people I don't recognise. I first thought it was a male choir, but it has females on the right. I'm sure I'll find out about this! But even without fully understanding it I think it is a fab mural! 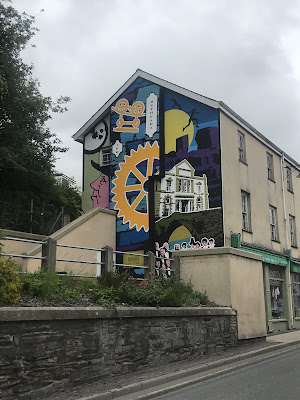