I had done my first climbing since the start of the pandemic three weeks before. The weeks after that the climbing was indoors, and I had had a friend visiting on Monday, respectively, so I bailed out. But the week after that I joined again! We would be going to Penmaenbach. When I got there, I was the first one. We would be with five in total. One of them was my favourite climbing partner (even though I hadn't climbed with him for a long time): Glyn. He has this special skill of putting you at the bottom of an impossible route, and then just talking you up. If you're completely stuck, he just says reassuring things such as "it's only a step-and-reach move, you can do it" or "just trust your left foot, you'll be fine! You're on the rope, nothing can happen to you!" and then you magically can do it.

We distributed the stuff and walked to the crag. When we got very realised there are more midges than we had hoped. Glyn had a longing look at some routes a bit further away from the sea, but they sounded difficult. I figured we would probably start closer to the sea where the easier routes are. And we did! Tony and Glyn led to the first two routes. Then Ika and I seconded them. I enjoyed that route! I had done it before and it wasn't very difficult, but it was nice to do a proper route. And when I got to the top I had a slight job; Tony had decided the carabiners in the anchors were too old and rusty and had removed them. That meant I couldn't really lower myself from the top of my route, so I rigged from the top of the next route along. At least I still remembered how you do that!

By then Glyn saw an opportunity and suggested I go belay him on one of the routes he had seen earlier on. I was up for that! And he enjoyed a route that clearly challenged him a bit. That meant it wasn't for me. And he had the added challenge of some rowdy crows higher up who were chucking stuff at him. There were also nesting kittiwakes, which were further away, but their voices carried. And then we even had a kestrel land.

By then others appeared, so Glyn then brought another rope on an easier route, while Tony seconded the original route. And when he was down, I went up. And he did his magic, and I got to the top! After the not very successful first night of climbing three weeks before that was quite an unexpected triumph. And by then the sun was low and it started raining. I thought that would be the end of things. But then Tony end Ika were keen to try that route as well. While they were climbing, the evening light went absolutely beautiful. And the rain stopped again! We all keenly photographed the amazing evening light on the rock that suddenly looked like Uluru. But at some point it got too dark and we had to scoot. But it had been an amazingly successful night! I had climbed two routes, one of which I had never expected to climb. And I had enjoyed an amazing sunset with friendly people! I felt really good after that. I expect all climbing nights to be like this, but my enthusiasm for climbing has been seriously rekindled! 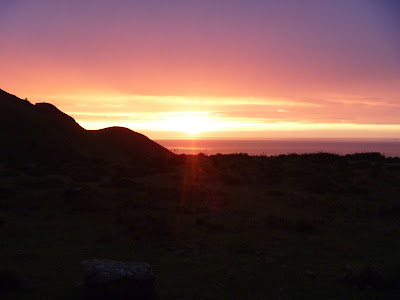