Caving clubs are hybrid creatures. In the southwest I often was underground with a combination of either the PCG and the CMEC, or the PCG and the DSS. And here up north it works like that too. When we dig during the week I tend to simplify that we are a blend of YCC and NYMCC, but in fact we also have two members of the CMHS. And then all sorts of people have multiple alliances, which include the YSS, the GOC, the YUCPC and who knows what more. And the PCG, of course. And last Sunday I made my debut on pure Cleveland Mining Heritage Society territory. Before moving to York I would have said that Cleveland is a city somewhere in the US midwest. But one learns and now I know it also is a North Yorkshire county famous for its ironstone mining. And there has been a fair amount of jet mining going on as well. So as step 1 in trying to enjoy some of the northeast before I bugger off to the far west I had Chris and Rich drag me through some of the relics of Cleveland's industrial past.

I started out by straying into the Cleveland industrial present. I missed a junction and suddenly found myself crossing the Tees. Oh dear! Time for a U-turn. Fifteen minutes late I was at the small town pub I was supposed to be. We plonked all the kit in one car and off to the first ironstone mine we went. It was on a hill, and the view was amazing. But that was not what we came for; underground we went. 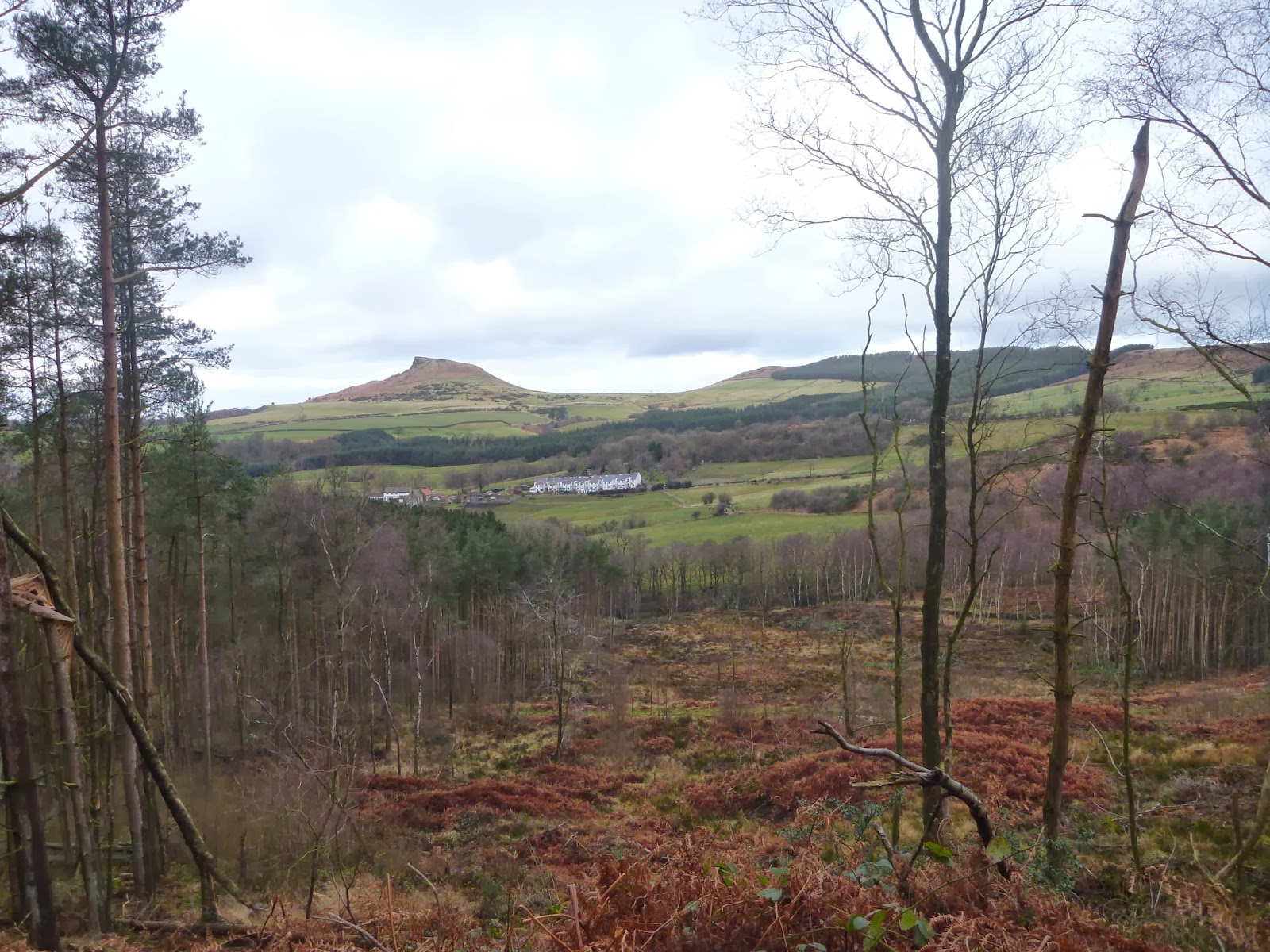 A view on Roseberry Topping, a local landmark

This was an ironstone mine that had closed the previous century. There was a lot of infrastructure still there! Furnaces and something that looked like pulley systems and whatnot. Maybe that was because removing any of that would require oxygen, which was in short supply; Chris had told me of "the Wheel of Doom" which is a landmark one should not pass, as beyond the air is really iffy. We reached it, and Chris thought it was a good moment for a picture, so Rich and I crouched down and tried to not move. And even though we weren't doing anything, we were both breathing like we'd just run the marathon. Not good! When the picture was taken and we could move again my suggestion was to get the f### out of there. Which we did. 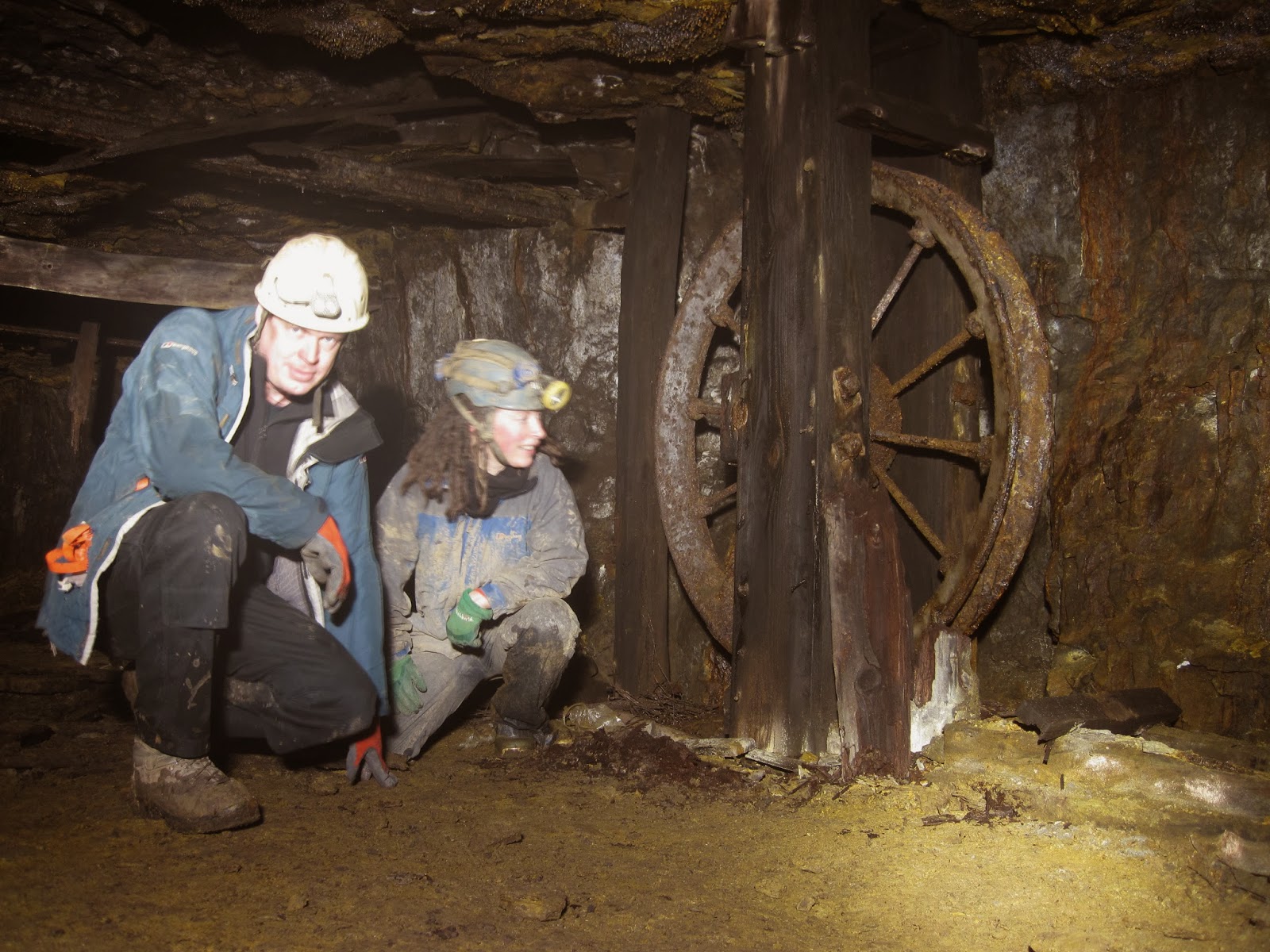 Rich and me at the Wheel of Doom - notice the sharp picture with blurry heads...

Then it was time for some jet mines. The biggest we went in was hobbit-sized. That seems to be normal for jet mines. And we tried two mines that had deteriorated to no more than small grotty holes, which were new to us. Nothing was readily explorable beyond a few metres, but maybe if next time we bring a shovel that may change? And we managed to not get attacked by badgers so we had fun.

The last trip of the day was an ironstone mine with inexplicably good air. We did extensive pottering around. Which was most fun for me; I hadn't been there before, and even though I was a Dutch person in British company, I was easily the shortest and the ceiling was so low that even I had to constantly stay in speedskating mode in order not to bump my head. We had come in through an elaborate gate, but came out through a comfortable, natural crawl under a tree; the caving clubs here really have too much time on their hands. 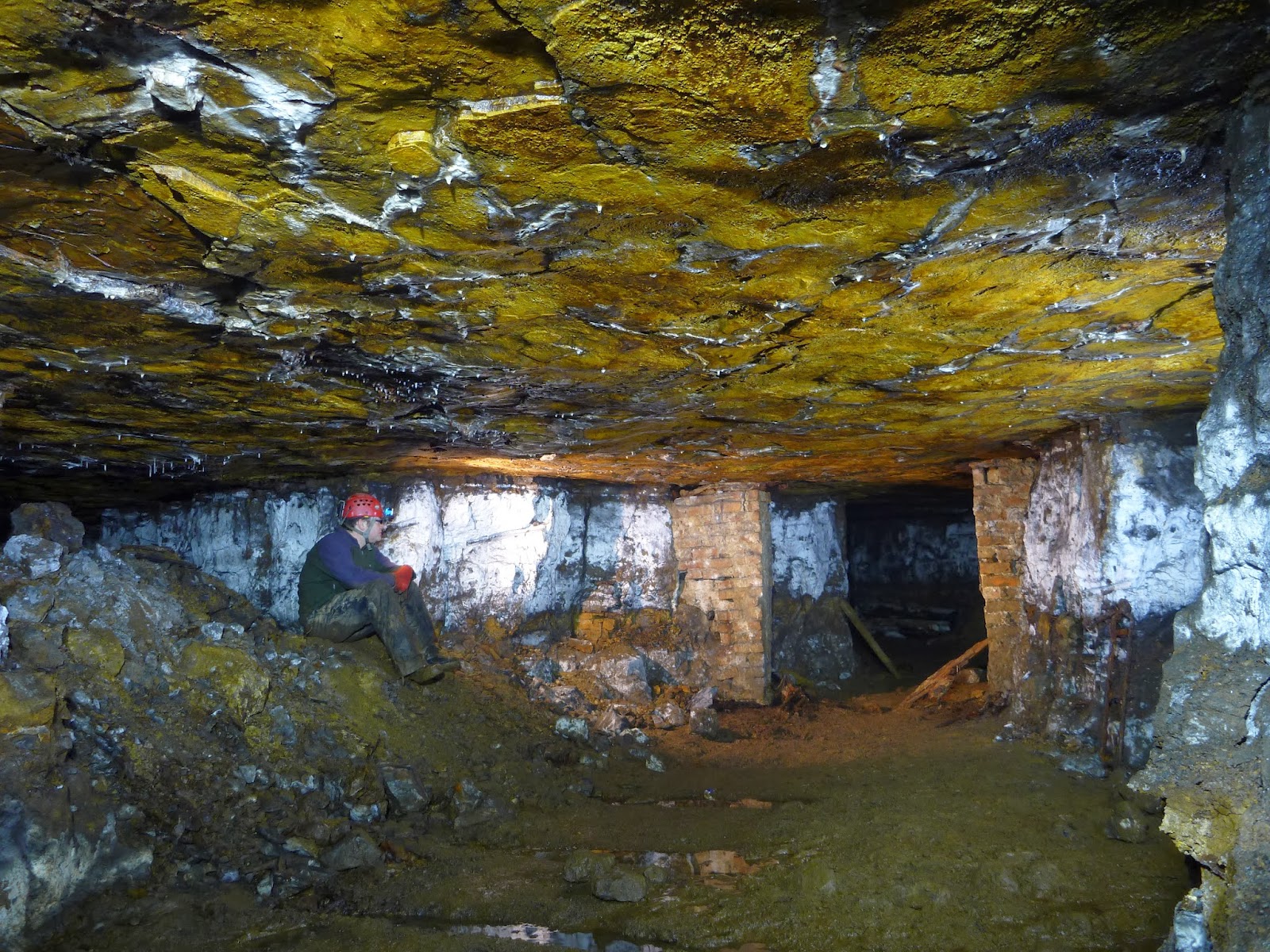 Chris in the second ironstone mine

We had our post-mine pint in the pub where we had started. It advertised itself as "the home of the parmo"; another north-eastern particularity. (Dutchies; is that more or less the same as a kapsalon?)I do not hesitate to try anoxic ironstone mines, but I have so far been too afraid to broaden my horizon to cover the parmo! I might never. But otherwise Cleveland had been good to me. Next time I'll try not to stray headfirst into County Durham when I go there...

Kapsalon = fries, meat (shoarma, doner or chicken shavings) and some salad covered in cheese which is melted in the oven. Similar idea to the parmo, but I believe that has fries on the side and not everything together in one sticky hot mess... Jitske