The runner is back

I'm a bit of a jo-jo runner. I start, and then there's some reason or other to stop. Then I feel bad about it, and am embarrassed about my lack of ability to do something like walk up a hill with caving kit on and a rope bag over my shoulder. So then I start again!

I blogged about my first York run. I lasted a while! But let it slip again. And while time passed my established route, with most of it on grass, had become less suitable. In autumn grassy paths turn into puddles of mud. And while I don't mind these in general, I don't prefer to run through them, as I do not fancy a face-plant during which I bugger my knee, which is what I am afraid will happen when I do.

So I picked it up again, but on asphalt and pavement this time. I tried a few routes and found one of pleasing length (6.5 km), quietness (almost entirely away from motorised traffic) and good looks. And plenty of opportunity to duck into side paths to see what's there! And it's all on hardened surfaces, so you don't end up slithering over mud. And I got so much into it I'm considering running a race next week! There don't seem to be many in this area per time unit, so maybe I should seize this opportunity. Maybe the runner is now back for a while... 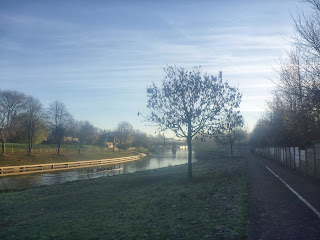 I start out along the river, in the direction of town 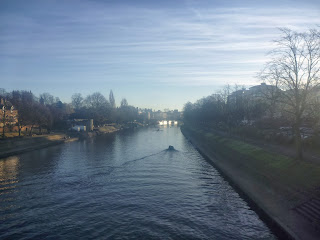 View from the railway bridge 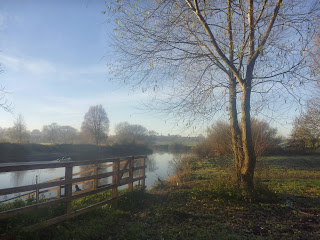 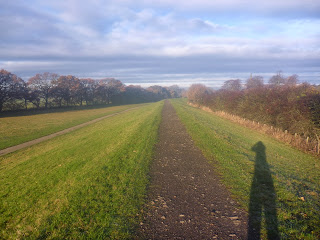 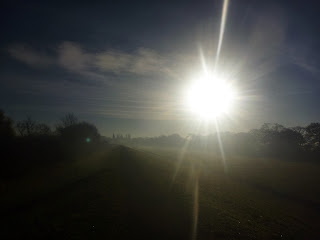 It was a beautiful, slightly hazy morning 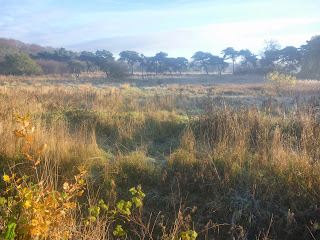 I unexpectedly found this patch of wild land behind the dike
Posted by Margot at 09:14