Christmas in the Netherlands

That's where Christmas happens! Well it happens all over the place, of course, but I have decided that it's a good default location. With my mum not being able to travel elsewhere for Christmas I travel to her. And as usual; when I'm in that neck of the woods anyway, I visit other people too!

I was picked up by Monique. When we got to her place I found myself attached to her youngest dog, who had sunk her teeth into my trousers and was growling enthusiastically, but she was peeled off swiftly and professionally by Monique's husband Mike. And from then on I had a nice time there! I stayed the night, and in the morning I went for a run. I went without camera, which was stupid; I was running along the shore of the IJsselmeer, the black waves were lapping at the dyke on which I ran, the slate-gray skies were raging overhead, and the cute dyke houses were as defiant as they were small. If there is a time and place to feel Dutch and proud, this might be it! I didn't intend to run excessively far, but it was just too beautiful to stop. I turned around when I ran out of land...

I found a picture online of where I ran

Later we went out again, to walk the dogs. And got a proper soaking! The young dog thought it necessary to check about 6 times whether that creature with the hood really was that person she had deemed acceptable earlier, but otherwise all was well. And soon it was time for the next leg!

This part of the trip brought me to historic Leiden, to my old friend Dick who was my MSc supervisor, and his wife. We caught up over beer, wine, port, cognac, coffee, and an amazing meal; with Dick you know you won't go hungry. Or thirsty. And there's always a lot to talk about; science, of course, but also his grandkids from all over the world, his latest traffic accident, sport, and whatnot. And here I also spent the night. The next morning I used my new laptop for a bit to work on some job applications while he already started preparing for the next meal. He's like that! It was nice to work to the calming chopping sounds coming from the kitchen, and I got stuff done, which made me feel a lot more relaxed. 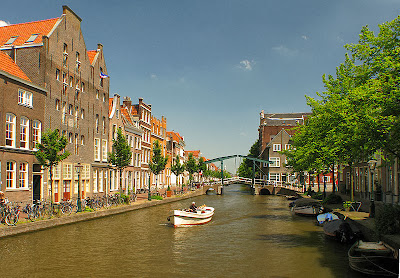 De Oude Rijn, where they don't live, but which gives a nice impression of Leiden
﻿
And then I was off again. To my sister! That evening we would have a "cousin-dinner"; a first. There is the annual family day, but that's with all three generations, and this was for one (mine) only. It would just be three out of seven, but it's a start. Theoretically we could reach six, as only two can't be sociably combined, but one of these six lives in Canada, one has about three full-time occupations of various kinds and one is a bit elusive. So three it was! A good start, anyway. But I wanted to be a bit earlier to see my sister and her family separately too. And I did! The kids showed me their tablet and their favourite Youtube videos and favourite Spotify tracks, and played me some piano. And with my sister I discussed more grown-up stuff like jobs and health and education and such.

Then we went to the station to pick up our cousin Sandra. I hadn't seen her in yonks; not since the start of this blog, at least! But she hadn't changed a thing. And we had a great time. I'm not too family-minded; I think because I'm not from the best of examples, and I chose to find my place among people I was not related to. But 20 years have passed, and I have found a place for myself now (not in space, but somehow in the world, if that makes sense), and maybe this is the time to go back to where I came from. And there is something about discussing life 30 years back with those who were there. And it was also just fun and good food. The only bad thing was the weather we had to get through to get there and to get back! 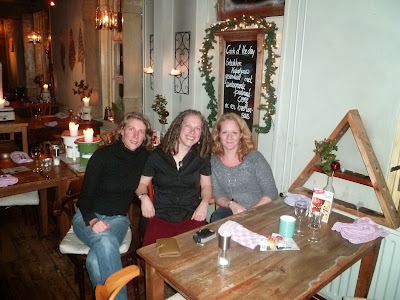 The next day I wanted to go for a run again. I was hoping to lure my brother-in-law along; he should really get a bit fitter, and running is easier with a pace-maker. And he joined me! Doused in lack of enthusiasm, but he joined. So I waited until he was ready and we were off. After only six minutes he turned back, but I was feeling fine, so I did a nice big loop. A nice one! Again I missed my camera. Will I ever learn? When the loop was some 270 degrees finished I saw the path that would make that 360 degrees, but it looked boring; I went straight ahead instead. And, of course, got lost. And you can't REALLY get lost there on the moorland, but I was lost enough to run a bit longer than planned. After about 80 minutes I got back to my sister's place, where I found her looking a bit apprehensive; she was supposed to be somewhere at 11, and it was already past that time! She had forgotten to tell me. Oh dear. She vanished, and I got told to just pull the door closed behind me after my shower. So I did!

The sort of landscape I was running through. Pic by Sebastian Scheper.

Next stop: my mum. The main goal of the trip! I wouldn't stay long; I would go to Amsterdam later. But I wanted to seize this opportunity too. So I did! Nothing like drinking tea with your mum. We also started making plans for when I would return, on Boxing day. And then I was off, to Amsterdam, to see Roelof. And his boyfriend, and whoever of my other friends he had roped in. (Which turned out to be Erik.) We went for dinner in some hip hot place on the other side of the street. It was fun, and the food was great! Unfortunately, my stomach started hurting. But shamelessly lying flat on my belly on the couch after dinner solved that. And a long night followed! With daft banter, and serious reflection, and music of various levels of quality. It was fun! But I tend to go home exhausted after trips to the Netherlands, especially when I have no control over my bedtimes, and I clearly had lost that here. And with passing time and rising alcohol levels the level of conversation didn't rise accordingly, so I played party pooper and started cleaning my teeth at 3AM. The hint was taken, and the day called. About time! 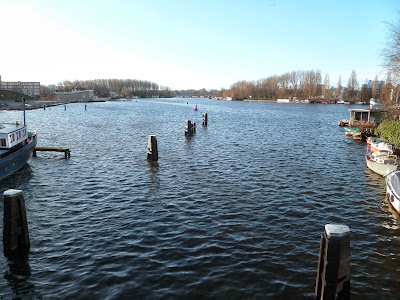 A picture taken the next day, of the river Amstel a bit south of where Roelof lives

The next day I woke up, and saw it was already past 11AM. Oh dear! I shamelessly woke Roelof up, had a shower and breakfast, and left the men to their hangovers. And went to my dad. He hosted Christmas day. I would see my sister and her family back as well. And they all came out to welcome me! We started with a small tour of the local playgrounds, on the initiative of my niece Nora. And we played some games. With my sister's kids already between 6 and 11 years old, the difference between child and adult is clearly shrinking, which makes it easier to integrate such things. It was all very domestic and Christmassy! And later, of course, a lovely dinner. After dinner my sister absconded, and I played another game of scrabble with my parents. And lost convincingly, but that's OK: I did lay "cyanide"! Now what's more important. And now it was bedtime; I felt the late night of the day before. 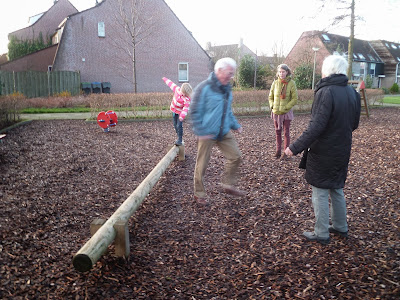 The whole family on the balance beam

I couldn't sleep. It's not unusual unfortunately, but still annoying. At 3.15 I got so bored I read a bit, and after that I could sleep. For a short while. I woke up again with a sore stomach. I couldn't face breakfast. After checking the river levels in York (I had seen English flooding on the news - how would York fare?) I dragged myself to Amersfoort again. I just managed a cup of tea with my mum before I decided to go to bed. I was knackered and miserable! I occasionally came out for another cuppa, but spent most of the day in bed. Not how I had imagined things to be, but what can one do.

The next day I felt better. And I needed to; there was a demanding rendez-vous in the diary. In the run-up to my visit I had suddenly received an email from my ex-boyfriend Floor, asking if I fancied going for a coffee. Yes! I did, but it is a bit like being asked by a 16 Tesla magnet to go for a coffee. One appreciates the offer, but might be a bit nervous about the sheer magnitude of the forces exerted on one's body. I had last seen him 2.5 years ago, which already was a bit nerve-wracking, and things have changed in the meantime. Some changes for the better, some for the worse, but none to make this occasion easier. And it wasn't. It was good to see him, and hear about all the changes in his life (including having a son in secondary school! Doesn't time fly), but the 16 Tesla were clearly felt. When he departed I returned to my mother a bit shaken. She had blamed the whole stomach problem on this meeting. We had expressed the intention to meet up again next time I'm around, so I'll have to try to make sure my stomach is in excellent condition. And for now, I dealt with the situation by going into town with my mum. 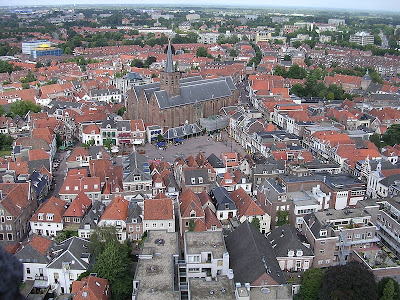 The square at which I had coffee with Floor. Pic by MelvinvdC at nl.wikipedia.

I had let slip I wanted more colour in my wardrobe, so my mother dragged me through every credible clothing shop in Amersfoort. We managed a shirt! And I stocked up on things not easily obtainable in the UK, like cheese and kokosbrood. And then my departure was imminent; I would visit one last set of friends (Henco and Maaike) on my way back. The top 2000 of all times festooned the occasion, as did a set of cardboard monsters. Be prepared for some idiosyncrasies when you visit these two! But my visit was brief, and ended in Henco valiantly offering me a backie, huge backpack and all. We're Dutch so we can do it! And that way my trip ended with slightly battered intestines, heart and backside, but hey, it could've been a lot worse...
Posted by Margot at 11:02