It was a bit of a hectic time. I would go on a hiking holiday, and that always takes a bit of preparation time. Once you’re in the middle of windswept Scotland you want to have everything with you that you need! But then Rob submitted his draft thesis. An entire thesis is a lot of text to go through. And that needed to be done before I would leave, as he had to submit to the examiners soon in order to have his viva before he’d be off to his first postdoctoral job. And before the holiday we would also have a project meeting. One of the things we would discuss was fieldwork plans; I had to draw up some stratigraphic information for that. And we would discuss the endlessly postponed Iceland manuscript; suddenly, people were throwing comments at me from all angles. And then there was this invitation to come to Belfast for an interview! So at the airport I was still wondering a bit if I’d forgotten something.


On the eve of my departure I had mentioned Belfast on Facebook. And I have two friends from there, both currently living in Plymouth. I figured that were I given the job, they might give me some advice on where to live and what to do. But they came in handy before; one happened to be in town on the same day! Simon the Historian phoned to suggest he’d show me around. I’m lucky!

I touched down, found a bus, got to town, dug out the map I had kept after my visit in 2002, and walked to the B&B. In my room I found the key to the bike I had rented, and which was parked outside. Spiffing! All went so smoothly that when I phoned Simon he wasn’t even in town yet. But soon we met at the university main building. 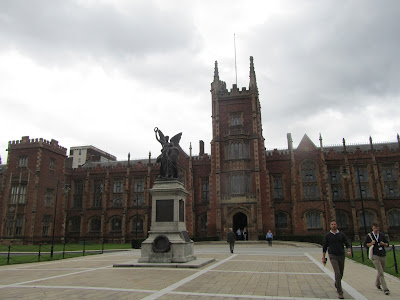 We roamed through town a bit. He pointed pubs out he liked, or his brother liked, gig venues and restaurants. And a column commemorating the first landing of American troops in Europe, on January 26th 1942. You’re a historian specialized in Northern Irish – American relations, or you’re not. And he showed me the waterfront. And then we decided it was time for a pint of Guinness. And while we were at it, we had dinner too. 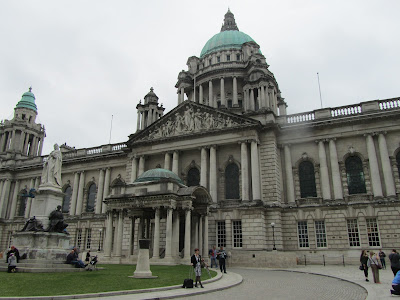 Then we said goodbye. I promised to let him know the outcome! And I trusted I would hear the outcome from what he had come for: a football match between NI and Russia. Oh dear... (Although NI would win! Hurrah!)

After I’d said goodbye to Simon I rode back into town. And out on the other side. I rode past the Black mountain which flanks the city on one side. Would I end up living here I might want to try to live close to it! I also passed thick streams of youngsters on their way to a big concert. And then I went back into town, admired the big fish that inevitably pops up when you google images of Belfast, and went back to the hotel. There I took advantage of the big mirror to decide on an outfit, and read a local newspaper. Ready for tomorrow... 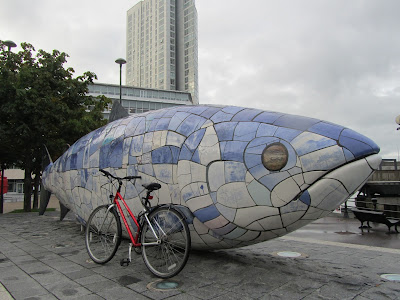 The fish sculpture and my rental bike

And then the morning came. I decided to first localise the building the interview would take place in, and then see if I could find Maarten Blaauw, who is involved in one of our sea level projects. And I found him! It was nice to have a cup of coffee, and after that he kindly brought me to the school office. I there met another candidate; a palynologist. She seemed nice! And then I was called up. The interview panel consisted of only three people; the PI, the head of school and Paula Reimer. They were very nice! I hope I did well. I think I did. I expect to hear on Friday... 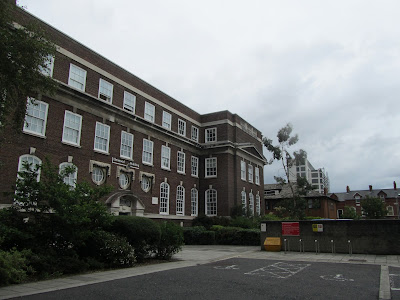 The building the interview took place in

I didn't hear on Friday. I left for Scotland knowing that not hearing anything wasn't a good sign, but that it did not mean anything conclusive. And while in Scotland I rarely had signal, but when I did, I still heard nothing. And then I came back to my house, finding lots of mail on the doormat. Nothing from Belfast! Until, after I thought I'd dealt with all the mail, my sister said "you seem to have more mail" and I noticed an envelope that was leaning against the door, and was camouflaged as such. I noticed a big Q on it. Oh dear. Mail from Belfast after all! I didn't get the job...
Posted by Margot at 13:25