“You should meet Annemarieke; she’s great! And also Dutch!” I heard it many times since coming to York. And I tend to have the somewhat grumpy Dutch approach to compatriots; I have been surrounded by Dutch people for most of my life, and people of any other nationality are exactly as spiffing as the Dutch, so why would I seek them out? And that’s a reasonable point, of course, but there is something I gloss over by thinking that way. Cultural reference!

One of the Aussies invited me for another game of “Klop”. I went to the designated location, failed to find her, and got her on the phone instead. She said she’d be there in a few minutes, but the elusive Annemarieke was probably already there! Recogniseable by her Dutch bike. So I saw a lady without a bike, then noticed a Gazelle in a nearby bike parking area, and figured the lady must be Annemarieke. And she was! So we met, and sat by the river with a beer and some focaccia. And we talked! In faltering Dutch. We’d both been abroad for 6 years, and speak English all day. Switching back to your native tongue can be a bit difficult! We were glad the Anglosaxons were imminent; they’d be our cue to switch back to English.

And then we played Klop. And then I said “Klop. Kent u die uitdrukking?” (If you’re not Dutch you won’t understand!) And she did an impersonation of Dutch cultural icon “de vieze man”. And I changed the lyrics of a Doe Maar song to fit the game of Klop. And we were generally annoying and unhinged. We had a great time! It was great to have fun with someone who understands all your daft references. I’m not sure if we’ll ever get invited together again. But I realised that, yes, simply being a compatriot can indeed be an asset. And not all Dutchies will be as daft and extravert as Annemarieke, but they’ll all know de vieze man! Hup Holland, en oranje boven and all that! 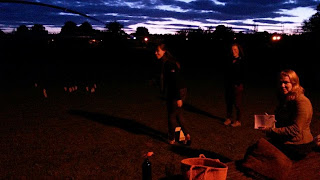 Night Klop with Annemarieke in the foreground