There's a first time for everything. Including dropping yourself, without any training, into a gaping chasm, as I found out just over a year ago. And the blog bears witness to that this activity (be it with increasing amounts of training) screamed for repetition, at least in my ears, and that I did nothing to resist that call. And this week my path lead me back to here it all began. Wheal Fanny! A beautiful copper mine.
We did not go very far the previous time, but still I was eager to lower myself into that immeasurable lode, between the rotting beams. And when we arrived at the site and started changing, and Rick mentioned he intended to lower himself into a previously unexplored hole, my enthusiasm became even bigger.

We dropped down, and after taking some first pictures we went on. I thought it would be Dave taking pictures in one side of the mine, and the rest coming with Rick, but how wrong I was! It was just Rick and me. The others don’t know how to have a good time! 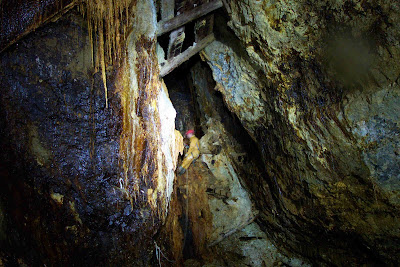 Lionel lowering himself down the lode. Pic by Dave Lionel and Richard in the Rainy Stope. Pic by Dave
Rick took me to a piece of plastic rope I had seen the previous time, and now it became clear to me what that was for. You could tie a proper climbing rope to it, pull it through a loop of sorts, and then use the climbing rope to come up! Very clever. Though it was a lot more faffing than it sounds. But we came up, to a level that looks quite like my favourite mine so far. And happily we walked on to the gaping hole in question. Rick conjured a drill out of his bag, and started placing bolts to hang a rope from. I found my vocation as a bolting assistant! And soon we had fixed the rope in impeccable style. Around that time we heard ominous sounds; that turned out to be Lionel, who had gotten bored, and came to see how we were doing. Good timing!
From where we were standing, it looked like the winze only went down a few meters and ended in a pile of rubble, but at a closer, rope-facilitated look you could see two narrow chutes going further. Just big enough for a human! And by the sound of it (we boisterously threw some things down) there really is a lot down there. We’ll be back! And hopefully soon. 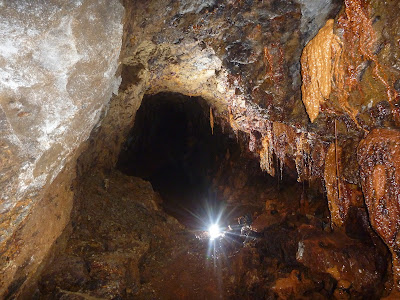 The part of the mine where we went exploring
On the way back I had some extra fun; normally you remove the bolts on the way out. So far I had left the rigging and de-rigging to the more experienced, but I figured it was time I became more proactive. So I found myself balancing precariously above afore mentioned chasm, trying to pry a bolt I could barely reach out of a wall. But don’t worry, readers, I was still attached to a rope which was fixed to another bolt, so the risk was negligible.
This trip, with its many rope pitches, took a while, so we skipped the pub this time. But damn was it a good trip! And it will only get better...
Posted by Margot at 19:03