Fieldwork. Prawn, fish and rice cultivation. Or prosperity without growth. Choose! Even worse than choosing between a cave and a mine. For some reason interesting talks tend to all be on a Wednesday at one. And some weeks ago, with three at the same time, was especially bad. I decided to broaden my horizon and go for prosperity, even though that talk would be broadcasted on screen, while the other presentations were given by actually present people.


The speaker (Tim Jackson, Surrey University) was introduced by someone who thought he didn’t need introduction. And as soon as he started talking it became quite believable he was indeed a bigshot. If you are reduced to a sort of a lustreless disco ball due to pixilation, and you still keep complete lays fascinated for an hour, you get something right. So what did he talk about? 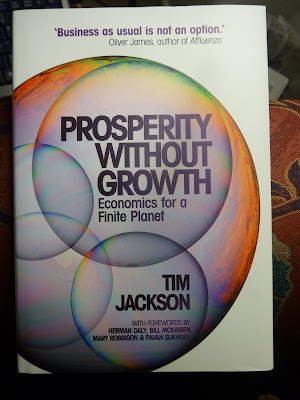 He started with the easily imagined concept that growth, which is what capitalist economy strives for, cannot go on forever in on a finite planet. But if we can’t have growth, then what can we have in its place?

Let’s start with geometry. We have a sort of spiral now. Production, consumption, investment. And out of the spiral rolls stuff. Ever more stuff. Stuff we don’t need, bought with money we don’t have, in order to make impressions that won’t last, on people we don’t care about, as the rather catchy quote was. And one part of the concept was to decouple the stuff from the spiral. Stuff weighs too heavy on the planet. And you can’t fully do without stuff, as someone in the audience justly remarked. People have to eat stuff, live in stuff, wear stuff. But by now we are way beyond that level. We can easily step quite far back before it starts to hurt.

But if the spiral does not produce stuff, what would it produce? There should be something produced, consumed, and invested in. One possibility is services. A massage has a fairly low carbon footprint, for example. The problem with that, though, is that if you want more and more of that (and as in a capitalist society, you need more and more, as efficiency grows, but you don’t want to end up with fewer jobs), you end up commercialising more and more services, some of which now belong in the realm of interhuman warmth.

You can, of course, try to keep the stuff in rotation. Produce it in a sustainable way, and try to recycle as much as you can. This was not explicitly mentioned in the talk, but I assume that was more or less what was meant with “green” production. And what was explicitly mentioned along that line: we could shift quite far on the line from possession towards renting, leasing, and borrowing.

There was another piece of geometry in the talk. Something like a figure of eight. The initial spiral of production, consumption, and investment, expanded with a second loop, with the environment in it. It is becoming a scarce product. If the one loop produces money, part of that can be invested in the environment. That may be profitable, but beside that it may yield commodities that have a different value. And the environment itself would then be consumed. And again invested in.

And in order to quantify things a bit (perhaps a gesture towards the nerdier scientists in the audience) we were given an idea of what the situation we are in now, and what needs to be done. As we speak, it seems, for example, that in the USA for every dollar of economic activity, 768g of CO2 is produced. If you want to do things sustainably, this needs to be brought back to something in between 6 and 36 g/$, depending on which scenario you think is most plausible. That shows the size of the change that is needed.

As individuals we will never make it. Too few people would make the effort, and they run the risk of placing themselves outside society. The speaker referred to a phrase of Adam Smith; people should have enough stuff to be able to live “a life without shame”. And what that is will have to change.

So now what? Are we going to do all this? Do the consumers make it happen? Does the electorate want it? Will there be legislation in that direction? Will it be in time? I must admit I’m a bit pessimistic. Sure, a shift has started. You can now worry about your carbon footprint without being regarded as an airhead tree-hugging hippie. And that matters! I member the complete mentality change in Amsterdam, from that you were a boring pant-shitting geek if you had light on your bike, to now being stupid and antisocial if you don’t. That makes people move. But it’s such a modest start! Here in the UK there is a government campaign promoting driving 5 miles per week less. Five miles! That’s the size of the political will now. Far away from the orders of magnitude needed to not let things get too far out of hand.

I think the political will to make really rigorous changes will only be born out of serious disruptions. Something orders of magnitudes more financially destabilising than the recent financial crisis. Or rich, white people are dying in large numbers. Or both, of course. And the question is whether that will still be in time to stop things spiralling out of control. Quite possibly not.

But who knows. And it’s good to know there are people who are thinking about how society can be changed in order to fit onto our limited planet. (In that context, by the way, read “heat” by George Monbiot!) Maybe they will be called upon sooner than I think. Maybe we’ll be telling the next generation of these strange times, in which people consumed like mad, but were happiest when managing to lose weight, and relieved after having dropped bags and bags of clothes off at a charity shop. Just to name something.

One way to find out, really. And while I wait to let time reveal how we’re going to fare I will read the book that the talk was based upon. When I’m done with that one (I just got through the forests of prologues) I might have material for another blogpost. Stay tuned, kijkbuiskinderen, and may you all prosper without growth!


PS It was Sunday when I wrote that about having just gotten through the forewords. And yesterday evening, which was Tuesday, I finished the book! I don't think I've ever been so absorbed into a book about economics. I can reommend it to anyone. And having read it there's some things I see I have underemphasised. One thing he mentiones, for instance, is the fact that those in power only measure in, and are judged by, purely financial terms such as GDP. They should stop that! From a per capita income of $15.000 happiness does not increase with increasing income; perhaps on the contrary. Trying to increase that will most likely harm the environment while it does not do any good. So the author thinks the environment should be measured, and taken into account, too, as well as some index of wellbeing. And then you can try to increase the whole lot of these things! And I think that's true. I hope politicians, which are strong players in this field, will realise it too. For now they utter a mangled message; they try to show a green face by initiating government projects on green energy and ecosystem protection, but at the same time they encourage anyone to spend and spend to keep the economy going - in the wrong direction. Jackson points out that the financial crisis already revealed some of the ways in which the direction it has taken are questionable.
Both here in the UK and back there in the Netherlands there's elections on the way. I hope wise choices are made, both by the electorate and those elected! Would Bos and Brown, to name some big ones, have read this book? Let's hope so...
Posted by Margot at 10:10