Back in Plymouth, back underground! Punctually I showed up on the designated gathering spot Tuesday night. In my very own car; Silverbonnet is back! I retrieved her Monday evening, with her new steering wheel.

We had to wait for Dave, who grumpily showed up somewhat late in an unloved new car, and lead us the way to the very obscure little parking lot where we really would leave our bolides behind. Dave knew the way from there, but Finbar had been there more recently, so it was he who lead the way. Some way, at least. We had a nice walk in all kinds of directions. Finbar darted up this hill and that. I started to wonder if we would get underground at all. At least it was dark and wet, so most of the caving characteristics were provided, even in the open air.

At some point Dave stopped believing in Finbars sense of direction and went where he thought it should be. And it was. So 75 minutes after gathering on the parking lot we reached the entrance!

It was one of the most modern mines we had done so far. Nice change! There were some collapsed bits, and lots of remnants of functional thingamabobs sticking out of the wall you could lay your slave flash on. And that was needed, as Neil, the caving group’s favourite flash monkey, is out of caving business for a while. He’s missed! 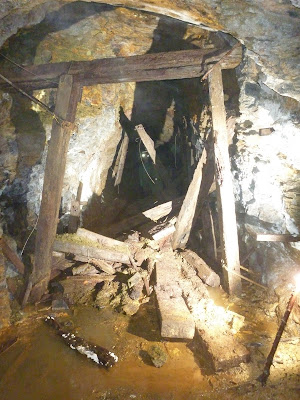 A section they tried to pevent from collapsing- so far with success (pic by Dave)
After the mine, where we spent only an hour, we went to the pub, where Finbar conjured up some self-made pickled eggs. Not bad! Some plans were made for visiting an upcoming beer festival. Why would caving be all about being underground. Under the influence might do as well. More above ground activity was contemplated: there might be a lamp making workshop soon. For that purpose I had to bring some stuff to Dave. Soon. The very next day, actually. 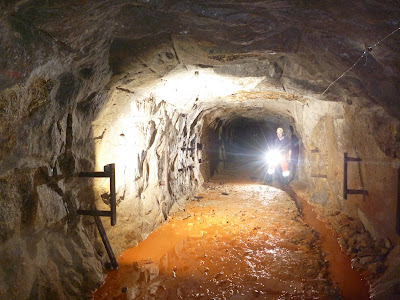 Only when viewing the pics afterwards did I notice I had set off Dave's flash as well
So on Wednesday I biked from work to Dave and then the scenic way home. A nice hour of fresh air, all in the name of caving! And on Thursday I got an email reminding me of a committee meeting that I had completely forgotten about. So again I pedalled through town for caving business. I was the first, so I settled in a comfy chair with a book; something I was quite eager to do in general. After a while two other committee members showed up. Dave would be a tad later. But after 45 minutes he phoned it would be a massive tad, so I decided to not wait for that, go home, and get an early night. The most relaxed meeting I had had in ages! Just some beer and small talk. Lots of caving activity this week, but only an hour underground! A week of caving for claustrophobes...
Posted by Margot at 09:09