Autumn night in the garden

I had greatly enjoyed having a beer just before the start of term with Martin, Sue and Dean. So I decided to invite the whole bunch down to my place. I had hoped we could sit in the garden and enjoy the autumn colours! But I figured we needed to decide that on the day. So I just suggested they show up with a warm jacket, and said I would prepare a fire indoors and one outdoors, and that we would decide on the spot which one we would light. And so it happened!

During the day I had prepared soup, bread, and guacamole. And I had placed my fire bowl outside. It was raining in the afternoon, so I figured we would be indoors. But then the sun came out!

Sue and Dean arrived first. And things escalated fast. Sue had brought catnip toys with catnip in, and stronger stuff than what she already had. And the cat figured that out immediately! So when Martin arrived only minutes later, the cat was already high as a kite. And that was not a problem, as that meant Martin amused himself with observing the rather daft cat while I gave the other two a tour. And then we decided to head outdoors! The weather was amazing. And we had a lovely night! We never bothered to go indoors. It stayed warm enough all evening and the midges were not an issue. And we could see enough to get to our drinks. And the cat even came out, when she had recovered a bit from her trip, to do the rounds and see from how many people she could get cuddles (answer: everybody). I think it was a success! 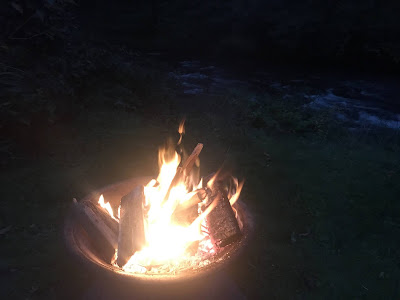 The previous time we had met, by the way, Sue had said in jest that she only took people who have a two-tier garden seriously. I can now confirm my garden has been judged sufficiently multilevel. In case you wondered!