Through the smoke flue into the dig

We would have an unusual two weeks in a row in the dig! Which is good; we still had some damage limiting to do after the slightly excessive blasting of three weeks before. The week before we had cleaned up a lot of the mess but there was more work to do. We wouldn't have explosives but we would have all the rest!

I had asked Miles to take me in through the Smoke Flue; I had only been in it once before, and I couldn't remember where you come out if you go in that way. That also means I couldn't find the way out to it. And it's locked, but still. And so that was our way in! Now I know. 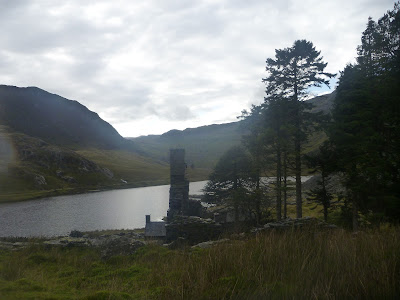 View from the entrance of the smoke flue 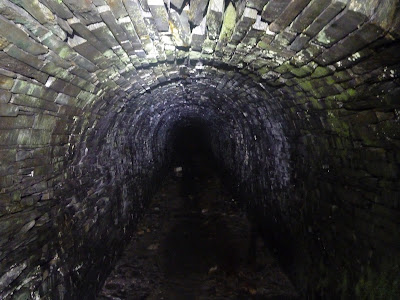 The smoke flue itself

When we got to the dig we saw the two scary dangly slabs were still there. And Miles had brought a rod to support a rock that needed supporting. He started out putting that in place while I went up to the far end.

I started to tidy up in the open space near the working end. I pretty much have to throw everything I get out of the growing passage into it, but that clogs up my exit! And when I figured it was tidy I went on trying to make progress. I started with my bare hands. Then I brought in the crowbar. Rather large rocks were willing to come down! Progress!

I came down to see how Miles was doing, and to have a cup of tea. The rod was preliminarily in place! And now he was tidying up at the bottom. But he was up for a cuppa too.

After the break I suggested he take the drill and start working on making the vertical passage bigger, so he fits through. I am a bit nervous about working there night after night without him being able to get to me if things go wrong! And I was soon reminded of how easy that can happen; I was handling a rather large rock, and I almost dropped it on the fingers of both my hands. Oh dear! I sorted it, but imagine I do trap myself that way. I would really want Miles to be able to get to me and lift it off! So I was happy to hear him drilling behind me, and content to continue myself with only a crowbar. There is a lot you can do with just that!

After a while I figured it might be time to come out. I turned around and could see the Drill! Miles was at the ceiling. Excellent! If he can get to the ceiling-parallel passage next week we are doing well. 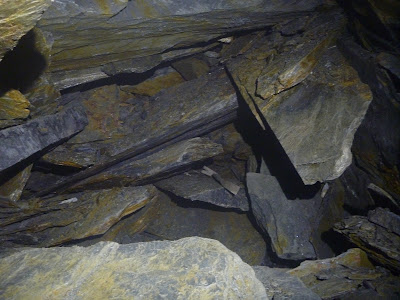 The current state of the far end

We went out (the usual way) and into the moonlit night Nice! And Miles' car had some issues and was down at the parking lot so we walked back down in said moonlight. It's such a beautiful place! And next time we'll probably be able to bring the scary slabs down. That would be good!
Posted by Margot at 09:12