Before our current dig was THE dig, there was the dig in a windy valley in the west. We had entered a mine at the bottom and steadily made out way up, in the end reaching a shaft or a winze (the difference is whether they reach the surface or not) that was filled up with loose gunk. We had had several sessions of digging out as much gunk as we could get to, and then leaving the place to itself for a while. The next time our digging action would have lead to destabilisation of the gunk, and more would have come down. The idea is that sooner or later the gunk will run out, and then we can happily clamber up and colonise that part of the mine too! And the last session had been a while. I had not been there (I had been in the other dig then) so I was keen to see what the situation was!

David had suggested this venue and not many people seemed keen. I did expect that; the place has a bad name. It is true there are two entrances, and one has crotch-deep cold water, and the other one has lots of stuff the farmer has dumped in, such as empty fertiliser bags, and sheep bones; one assumes the bones were connected to the rest of the sheep when they were placed in it. And the previous time, a fresh carcass was found. Doesn't do much for popular appeal...

We drove to the usual lay-by and were the first. We changed. Then a car appeared; it was Paul! I had hardly seen him since he had acquired a job on the Snowdon railway. He wouldn't come with us (he hates the place); he just popped by to say hello. Nice!

We went in (through the bottom entrance; that way avoiding the carcass) and clambered all the way up. With just two people there is hardly any waiting involved! We got to the top. I stuck my head in the bottom of our winze, and then made the rest of my body follow. There was even space enough for David to join me.

I knew David expected to find the shaft as good as empty, and showing the way on. He expected a side passage, and another winze from there. But there was nothing in sight. There was still a lot of gunk, all stacked against the far wall, and you could only see up to a big boulder. No side passages. And there is no reasonable way to safely dislodge a boulder from a position like that as you HAVE to work underneath it. Oh dear! 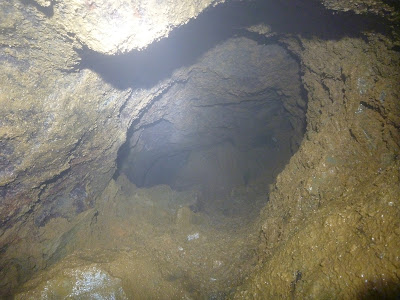 Looking up in the winze

We decided to just do what we always do: digging away all the gunk we could (safely) reach. After some hard work the pile of gunk started to throw stuff at us. Good; we've clearly destabilised it further! Time to go.

We had to kick everything down the next passage too; there is hardly any space here and you don't want to block you passage, or perch a big load of unstable gunk on top of a rope pitch. When that was done we made our way out. And early night! As usual, I didn't mind that... and we can only go back in another 6 months or so to find out if we have any change of getting to the next passage with our current method. If not; well, then we have had fun!
Posted by Margot at 14:20