It was time for another long Saturday run! I would go and help Guy and Kate with painting their garden house though, so I didn't want to go too far away. Going on where I had left off last time on the coastal path would take too much time. I decided to just look for a nice loop on country roads nearby. I found a nice one near the Mona Showground. I drove to Gwalchmai, parked, and set off. I had brought the map and needed it to negotiate the actual village. I then overlooked a junction, but quite soon realised it, and corrected myself. After a while I came to a road to the right; I didn't think I needed that. That would be a fateful mistake. It actually was! But as I thought I remembered I didn't need that junction I just plodded on.

It was a nice day! Or rather, a nice part of the day. The landscape was unassuming but really beautiful anyway. I ran to a T-junction; that was as expected. Then I expected a right turn soon. It didn't come. Then I reached a bigger road. Oh dear! The map came out. Then I noticed I should have taken that right turn ages ago. No w I could only reasonably turn around and run the same way back. I didn't want to run along that bigger road!

I turned back. All was well. Then I suddenly saw a fox in the side of the road. It seemed to be running away from me. I moved closer, hoping to see it bolt across the field beyond, but it was still there. It seemed trapped! Oh dear. I couldn't quite see how and didn't want to approach too much; the fox would flail and charge and wrestle when I got close, and that tends to result in awful injuries in a trapped creature. I pondered a bit. What to do? I figured freeing it would require at least gloves and pliers. I don't carry those on a run. I ran on, got into the car, drove home, and googled animal rescue. After some faff I got through to the RSPCA. They wondered if the fox may have got away unaided. Could I get back to it? Eh, well, yes. I texted Guy and Kate I would be late. Then I packed a water bottle and something to read and got back into the car, this time parking close to the fox. It was still there! So I phoned the RSPCA again. They said they would send someone. I explained to them where it was; I had noted down the grid reference but they were working off Google Maps. Oh well, that works too. I explained where it was and waited for half an hour. The RSPCA person had said they couldn't say when an inspector would appear. I read for half an hour and then left. I got home and really quickly ate something (it was already 3PM!) and had a shower. Time to get to that garden house! 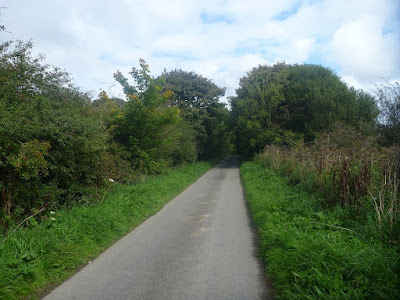 The road with the fox

When I was about to get onto my bike the phone rang. It was the RSPCA person! He struggled to find the fox. I guided him towards it. I had memorised quite well where it was, including landmark trees and flowers! I got him to it. I had thought the poor thing was caught in a fence, but it turned out to be a snare. The local farmer must have had fox-and chicken-issues! Oh dear. But the RSPCA bloke would not leave the poor creature there. Then he hang up and I went down the hill.


When I was explaining to Guy and Kate what the fox business was all about the phone rang again. He had freed the fox, who was unhurt, and had scampered off. Success! It was nice of him to phone me to confirm that. And then we could finally get on with that garden house. This day didn't go as planned, but a poor fox has been spared a lot more time in a terrifying snare! And the garden house got painted too! (Except for the ceiling as we ran out of paint!) And I still can do the route I had in mind in the first place...
Posted by Margot at 09:37