When Welsh class stopped for summer, one of the ladies in the class said I should give a shout if I wanted to go for a walk with her and speak Welsh while doing so. It was Dani, who had narrowly escaped becoming Welsh Learner of the Year. It was a good idea! I didn't get around to it for a while, but when I saw a weekend with walk-potential coming up I texted. She was up for a short walk on Sunday! Nothing too strenuous as she had a cold. OK!

I suggested driving to Pontnewydd and walking along the river Gwyrfai. She thought it was a good idea! We started off doing just that, but soon we bumped into a fence that said "no pedestrian access". Oh dear. We went the other way! That way we didn't see much of the river, but we had a very nice walk anyway. The weather was nice, the land calm, and the views good. And it was nice to practice some Welsh!

We had set off at 9.30; we were back by noon. A modest trip! But that was good; the day before I had already done a big walk, and later that same day I would head underground. No rest for the restless! 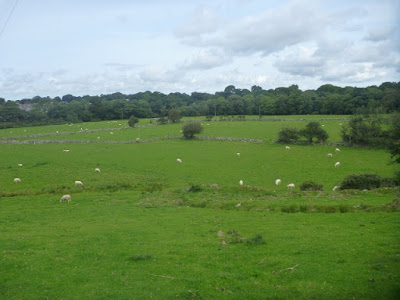 Fields just outside Pontnewydd
Posted by Margot at 09:08