Soon after I moved to Wales I came across the term "Eisteddfod". I looked it up in my Welsh-English dictionary. It said this word meant "Eisteddfod". Thanks! That helped.

You can't live in Wales very long, though, before you learn more about it. The Eisteddfod is a yearly cultural event, where the Welsh (or rather, the Welsh-speakers) get together and compete in all kinds of cultural ways. Singing, poetry, prose, band music; you name it. The main prizes are a crown for the best 'free' poetry and a chair for the best 'cynghanedd'; some form of rather strictly defined Welsh poetry. And of course there is a lot of stuff around that: it's a whole festival with food and drink and stands selling nick-knacks and whatnot. In the olden days, there wasn't only a national one, but also countless many local ones; even the mine I frequent had one back in the days. Miles managed to buy the chair of one of those.

I had never been. The previous Eisteddfodau, held when I was already living in Wales, were between rather far (2015, mid-Wales) and very far (2014 and 2016, south Wales) away. Now it was on Anglesey the pressure was on. Elwyn, my Welsh teacher, encouraged all of us in his class to volunteer. So I did! I offered one morning (9AM-1PM) to the organisation.

This year it had started difficult; the weather in the first weekend was atrocious, and the terrain became a puddle of mud. But I volunteered on Wednesday, and by then the weather was lovely! Parking was still elsewhere, though; they did not want to have cars getting stuck in the mud on the terrain itself. The Mona Showground, with its parking on concrete, now functioned as the parking lot. Shuttle buses brought one to and fro. I got to the terrain without problems. The person next to me was one of my former Welsh teachers! That was nice. We caught up in the shuttle bus.

Upon arrival I found the steward to sign in, and the tent which holds all activities for Welsh learners ('Maes D'). My shift could begin! It wasn't busy yet; at 9AM it is still very quiet. But one can start by having a cup of coffee with fellow volunteers. One of them I knew; she was married to one of our (mature) PhD students! That was nice. And the place was bristling with Welsh teachers. Including Jenny and Elwyn. And Sian, with whom I had travelled up. 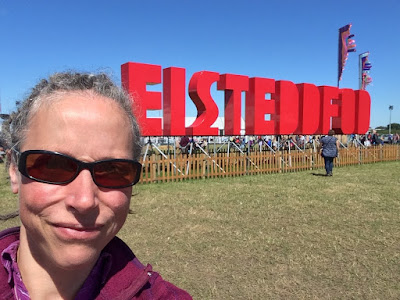 Obligatory selfie with the 'Eisteddfod' letters 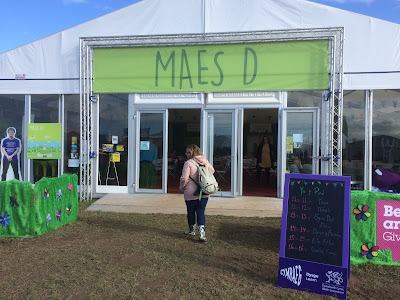 Maes D from the outside 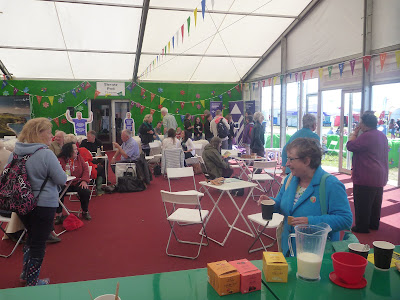 Maes D on the inside

I was mainly on chatting duty. Many Welsh learners pop in to just talk a bit with other learners. At 11AM I was put on an unexpected duty; there was a yoga session scheduled, but it looked like there weren't many participants. I was sent in to fill some space! I am not into yoga at all. Oh well, I was happy to show my good intentions. But after the start of the session people kept coming in and at the end the room was full!

After the yoga session I did an hour of cafe duty. Then time was up! I was free to go now, but on the one hand I wanted to see more of the Eisteddfod, and on the other hand; I wanted to stick around until 2PM when there was a session in the 'Welsh learner of the year' competition; two of my classmates were in the finals! Exciting. I had a little wander; saw the stands, heard some choir singing (obligatory too!) and saw some art. The hour passed quickly! Then I was back for the Welsh Learner of the Year. I said hello to Richard and Dani, from my Welsh class, and saw their introductions. But when I found out the winner would not be announced until the evening I left. I had more to do! 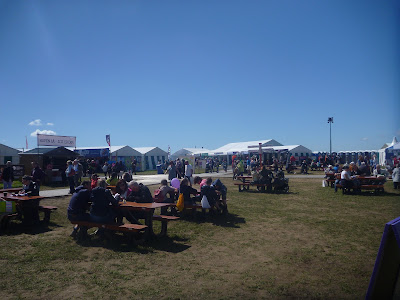 A lovely day for it 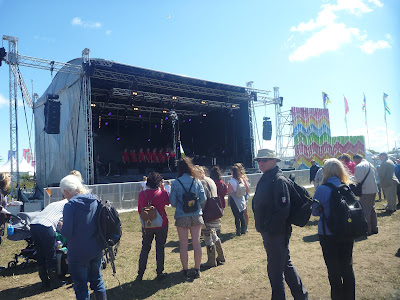 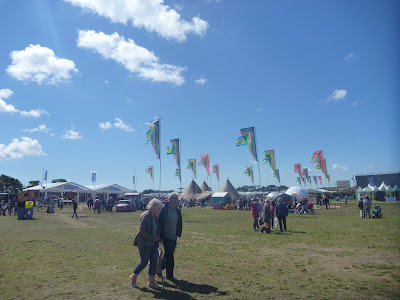 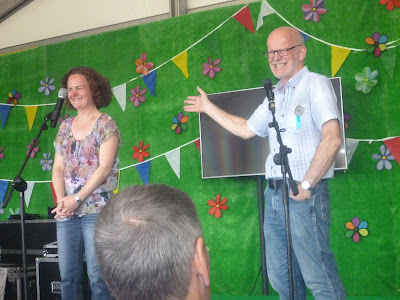 This year, by the way, there is a slight sadness to the celebrations; it is 100 years ago since the infamous Eisteddfod with the 'Black Chair'. This was a chair awarded to the poet Hedd Wyn (bards are supposed to use a bardic name, not the one in their passport; 'Hedd Wyn' means something along the line of 'Blessed Peace'). When his name was announced, nobody came forward. It turned out he had just been killed in the battle of Passchendaele. It was the only chair ever awarded posthumously, as far as I am aware. It was draped in black cloth to mourn the bard's death.

After this grave paragraph I am a bit hesitant to announce that the winner of the 'Welsh learner of the year' competition was not one of the people from my class! It seems so frivolous. But congratulations Emma Chappell!