When I was in the Netherlands over Christmas I had a great time. My mother did too! I could tell. I decided I should not wait as long before visiting her the next time. I thought about when I could come over; I thought a weekend in between my Christmas travels and an upcoming trip to Norway would be a good idea. And then I realised that was only one weekend away from the preparatory meeting for this trip. So that would be it then! I'd go then. I made sure to book soon.

I flew on Friday. I left the office a bit earlier than normal and drove to the airport. I got a bit nervous; there had been an accident on the way there, and traffic didn't move. Fortunately, it started moving again soon enough for me to catch my flight. All went well and soon I stood in front of my mother's door. 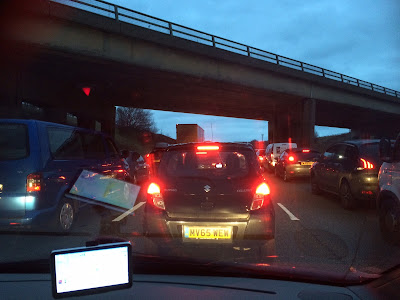 Stationary traffic near the airport

The next day I had to get up early, as the preparatory meeting was in the Hague at 10. The Netherlands are small, but door to door this was still quite a trip! And I had only told the people who were organising this that I would be coming. All the others were surprised to see me. And there were two people I hadn't met yet; it was nice to see them before going on a demanding trip with them!

We had a good meeting in which we talked through itineraries, money, equipment, planning, food  and whatnot. It always takes a while to talk through such things with 11 people! And we even had a distracting toddler scurrying around (which won't join the Norway trip, in case you wonder). I'm looking forward to it. The trip there will be a pain but it will be worth it! 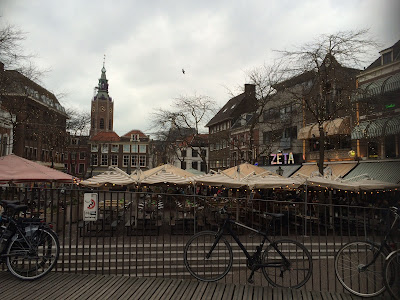 That evening I was back at my mother's. I hadn't planned anything else; I figured with the Saturday pretty much spent in the Hague I wanted to have the rest of the time with her. No rushing around! And it was nice. The next day I already had to leave in the early afternoon. My mother had bought beer fo rme; I had only had one, so she offered me another one for the way to the airport. I liked the idea! The intercity didn't go so I took the slow train. No worries; I had a nice beer, and a book to read! 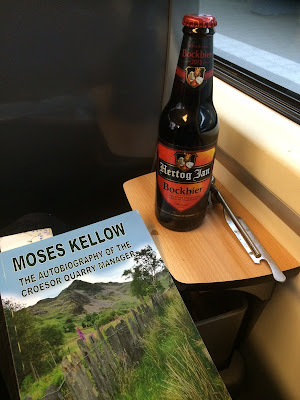 The next morning I was back at my desk as if nothing had happened. It has been nice! It's not good for the atmosphere, but it is nice to see my mother a bit more often...
Posted by Margot at 16:56