A new prison is being built in Wrexham. Why does that matter? Well, one of our Thursdaynighters is a civil engineer and he's involved in the building. And for those not familiar with the minutiae of North Wales: Wrexham is quite far East. And he had figured that this might be a good reason to have a look in a rather eastern mine. Somewhere before my time the group had attempted it, but some had turned back close to the entrance due to it being very constricted. Not everybody likes it. Those who had moved on revealed it is a veritable collection of ladders, walkways, ropes and other strange infrastructure. It sounded fun! But several of us bailed out due to health and/or health, and at least David was clearly hoping to muster some excuse of sorts. But he couldn't hink of anything.

In spite of this reduced field we still had a fair group; we had our occasional visitor from Liverpool, who seized the opportunity of not having to drive too far, and the chap from Llandudno (also to the east) had even brought his 16 year old son. A strange choice, introducing a minor to mining through a mine David is apprehensive about!

We got there and changed, and found the entrance. Soon we were crawling in. If you have a mine with many ladders, ropes and suchlike, the going is slow, as you should always only have one person on such structure at any given time. In addition, Phil, who was leading the way, was keen to keep an eye on how people were faring, so he stopped once in a while. This resulted in a lot of sitting around, waiting for the next obstacle to become vacated by the person in front of you. Luckily I liked the place! And David took to it a lot more than he must have done the previous time...

One obstacle was a winze with a rope ladder going down into it, but only reaching part of the way (some quarter of the way, I'd guess). The rest was only catered for by a knotted rope. It looked nuts from above! Paul didn't like the look of it. Mick, with his fragile back, didn't either. They decided to go back. The 16 year old, however, happily clambered down. His father clearly couldn't stay behind! 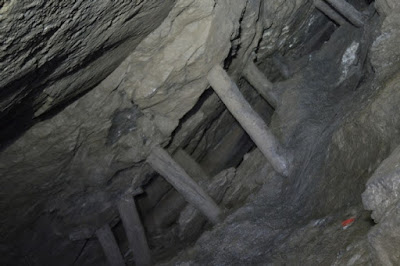 When we got to the end there was some nice flooded stoping with stemples one could use as stepping stones. From there we would go back. When the return was announced I seized my chance: I legged it. Up a rope, a ladder, another ladder, another rope, etc etc etc. Nobody in front of me, so going at my own speed! Nice. At the top of the strange winze I waited; I wanted to make sure the person behind me would get up without problems. After some ten minutes David appeared, and he was up in no time. We went out together.

We saw the lights of Mick and Paul approach; they had had some fun exploring the surroundings. A lot later the others appeared. I had quite enjoyed myself in this infamous place! And the youngster had had fun too. He should come along more often.

The night didn't end so well; s it was quite a drive home I decided to try and get some sleep in the back of the car, but closing your eyes in a moving car can lead to motion sickness. I got woozy! And sat up. I was desperately waiting for the A55, which is the main road and thus fairly straight, but I soon realised David was driving back through Snowdonia. Oh dear. I was very glad to be home!
Posted by Margot at 08:58