Every department needs a social instigator. Geography in Plymouth had Jon. Environment in York has a guy called Bryce. He’s the one likely to send emails around rallying people for a trip to the pub. And he’s an Aussie, so he thrives in the heat wave that’s currently chastising the country, and he likes BBQ’s (did I already mention I’m fond of national stereotypes?). And he’s not the only one; associated with the department is also a compatriot of his called Cara. And they sent out a call for a BBQ! I accepted. It was very nice. We were only with 6 people (of 4 different nationalities) but it was good. And after the actual BBQ she introduced us to some daft Finno-Australian version of ten point bowling: Klop! For those who want to know all about it there is to know: watch this. For those who can do with less detail: it’s some sort of bowling in which you put the pegs back up where they ended up after having been knocked over, so they spread out. And not all pegs are worth the some. That was fun too! And it is also nice and familiar to have Aussies around... 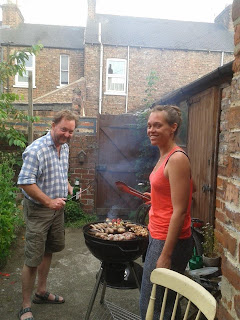 Bryce and Cara in their natural habitat 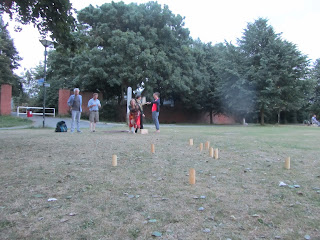