It almost didn't happen! We were getting kitted at the side of a road, when a tractor drove past. It turned out to contain the farmer who owned the land that the mine entrance we we heading for was on. We thought the copse it was in belonged to the woodlands, not the fields! For rummaging around in the woodlands we did have permission. But the farmer didn't see harm in some eccentrics vanishing into a small hole on his land. And why would he? So it was a go! 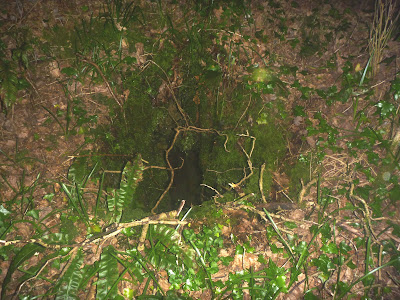 Who would have thought such an unassuming hole would hide such spectacular views?

We walked down a path to a promising sign. It said "danger! Keep out." That attracts us like flies. I was the only one who had walked up in SRT kit, so I also was the lucky one to go down first. I thought the little rat hole would lead straight down, but it didn't; it gave access to a small narrow tunnel, at the end of which you looked down into a gaping abyss. It must have been explored before; I saw two bolt holes above the drop. Good! Unfortunately there was some wood and some garbage down there too. I threw the wood down, which resulted in monumental clamour, and I handed the deckchair skeleton back to the surface. It was crammed enough down there without it! Lionel handed me two bolts, and before I knew it I was bolting and rigging the pitch. It wasn't very comfortable; I could hardly turn around, and I was rigging the rope while still dangling from it. When I was done it became clear I had underestimated how much rope I took up myself; when I took myself out of the rope I saw it was all rather tight. But as that isn't too relevant I went down anyway. Slowly; this was, for us, uncharted territory! It was a special place: it was a very narrow stope. While I was abseiling I kept my knees on the wall; normally you would use your feet, but there was no space for that. In places I just had to slide down vertically. But laterally it stretched very far! And it was deep too; about 20m. And you could see it had reached the surface, but had been arched over, probably after closure of the mine. A very special place! 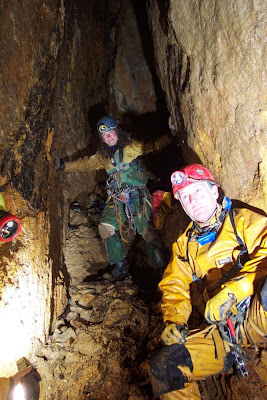 Lionel and me on the bottom of the stope

I saw some surface below me, and initially aimed for it; when I came closer, though, I saw it was a false floor, so I passed it by and went all the way to the bottom. There I got myself out of the rope, and hid underneath the false floor, as the men above me were throwing some more things down to clear out the entrance a bit. Even a small stone hurts when it hits you after falling 20m! 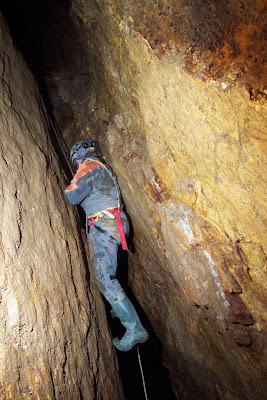 Finbar comes down the narrow stope

Soon Lionel was down too. And then Rick. While Lionel and I were having a look to see how far the place extended, we could hear Rick exclaim "I really enjoy this place!" and utterings of similar nature. We saw that at the south end there was a collapse. And we found lovely green rock! I put a few pieces in my bag. It would later turn out to probably be fluorspar. And when we turned back, we saw the a collapse on the north end too. So not much to explore down there, but opportunity to be amazed at this paper-thin slit in the Earth. Dave got out his camera and flash guns; that was my cue to not even attempt to take pictures myself. I would rely on long exposure times; that doesn't go together well with flash photography. Rick remarked "I REALLY enjoy this place!" While Dave was flashing away Finbar came down, and while dangling midway, suddenly remarked he had lost one of the lenses of his glasses. Now he understood why the world looked so strange! An inconvenient place to lose a lens... But he was lucky; Lionel managed to find it. I didn't wait to see what the damage had been. falling 10 m onto rock isn't the best for glass! 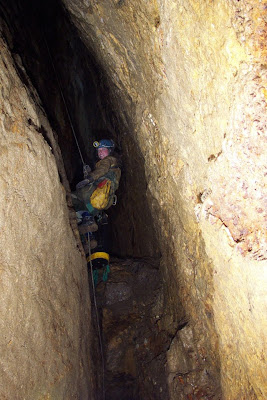 Me going up again

When Finbar was down, I decided that as I had been the first one down, I would also be the first one up. Other than taking pictures there wasn't that much to do! Except proclaiming how much one REALLY enjoyed the place. And it would take the five of us quite a while to get out anyway. I brought up a rope bag as the rope rubbed a bit. That is one of those things you have to take seriously. Rubbing rope kills! So when I was up I installed the rope bag as a rope protector, and then invited the men up. When Lionel was up too we had a little stroll to see if there was more left of this mine. And then we went back to see how the men were doing. Rick came out, telling us that he REALLY had enjoyed that. Waiting turned out to be a cold activity (or rather passivity); it was a clear night, so it was getting chilly! Even though Rick was happy: he REALLY had enjoyed that! I was glad to get into my cry kit and rush to the pub (where Rick would tell us he had REALLY enjoyed that) before it would close. Well, I actually enjoyed that too! A new place, and me rigging it as well! Not bad!

ps Dave's memory card was faulty! So the image above is the only underground picture of the place...
pps He managed to recover the pictures after all!
Posted by Margot at 09:16