We had five cores from the Nar Valley. We had one core fromPeterborough. Each from their own interglacial. Is that enough for a three year project on unravelling sea level change in interglacials? No. So we went yet somewhere else. Where this time? We contemplated exotic South Carolina. But as we had reason to doubt to preservation of microfossils, which we need for our analyses, in these sediments, we decided against. Instead we headed for trusted old Sussex. We had been there before, at an INQUA field meeting. A chap called Martin Bates had showed us around in a landscape riddled with old raised beaches and the likes. He had spent decades digging and coring around in these sediments, and knew them like the back if his hand. With the aid of able co-workers he had made quite an impressive inventory of the interglacial sediments and their microfossil content. Enough to have a good idea of where we should core; not enough to answer our research question, as he had sampled at coarser resolution than we would need for our project. So we would now follow in his footsteps, and core up our own archive of interglacial sea level change.
Our base in Sussex would be West Wittering. The four team members travelled there, as did Martin Bates himself. He kindly came over from Wales to show us around. So on a sunny Wednesday we set off. We had picked some of the sites he had worked on; some had been lost to science by buildings placed on top of them, or to withdrawn access, and some were known to not have very good microfossil preservation. So Martin lead the way. He showed us a quarry he had worked in, some farms in whose fields he had cored, and a beach with an erratic boulder in it. He talked us through who owned these places, how the sediments varied laterally, and more of such useful information. And then it was pub time. And then dinner time. 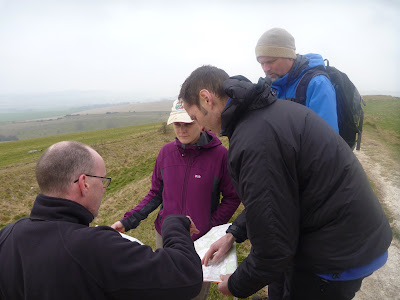 Martin Bates shows us what we see in the landscape

The next day we would put this information to use. We went to a field of which the farmer had given us permission to core in. We ferried all our heavy kit over the fence (or underneath), regarded with bewilderment by the resident cows, and we found the approximate location of one of Martin’s cores. Time to drill! Antony tried to start the engine, and, in an impeccable re-enactment of the fieldwork in Peterborough, snapped the starter cord. But as he had done this before, we knew just how to fix that. Until we opened the engine, and saw that the starter coil had snapped too. The sharp metal had probably severed the starter cord. That was more serious. We went back to the car to make some phone calls. 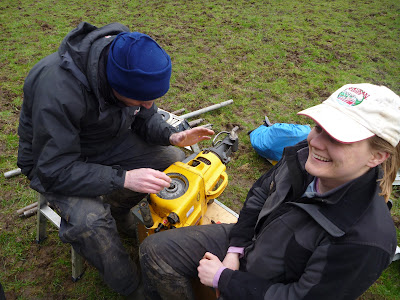 Tasha is still smiling, in spite of the coil having snapped

There turned out to be a tool hire firm nearby. They were very helpful, but they didn’t have anything that was compatible with our, admittedly, ancient drill. But we were lucky; the company that had provided the drill in the first place had one we could borrow while they would see if they could repair the old one. And, by sheer coincidence, they were not far away. So we drove over there. The drill they had was much bigger and heavier than the old one, but also much newer. Not a bad deal! And we got the bits and bobs to make our jacking system compatible with it too. So off we went. Back into the muddy field! Where we started the new drill and hammered a barrel down without issues. And then we needed to jack it out. And the jack didn’t bite. This was not our day. We packed up. Tasha dropped us off at the house, and drove back to the firm that had given us the kit. She would find out we had indeed received a non-compatible part; we exchanged it for the proper one.  But the day was over. We finished it with a nice pub meal. 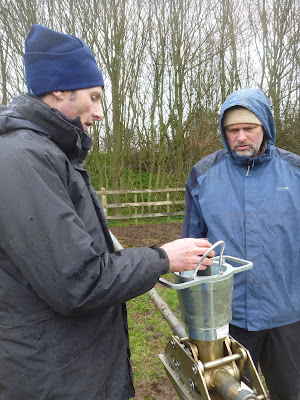 The next day we tried it again. We had no issues hammering the core barrel down. And then we needed to bring it back up. And that wasn’t so easy. The ground was soggy. The idea is that you jack the barrel up. How it worked out was that we jacked the jack straight into the ground. Soon it was almost a foot down. But centimetre by centimetre, the core came up. We found some wooden beams at the edge of the field, and placed them under the jack; we broke them instantly. But then we just rearranged them. To my surprise, we managed to get the core out. It wouldn’t have been the first time a core barrel would get stuck underground, and would be left there! 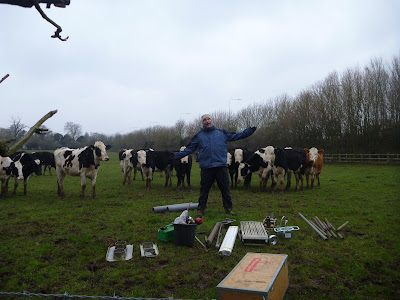 Roland, the kit, and the normal inhabitants of the field we would core in. 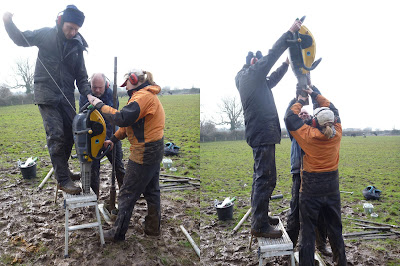 With the new drill and the new jacking butterfly we could get started! 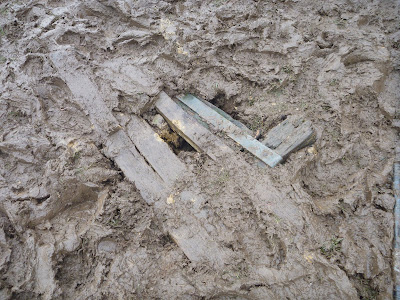 This is what the drill hole looked like when we were done...

It had also started raining rather hard. And with all the kit being as muddy as it was, we all looked like mud golems when we returned from the field. We were running out of places to put our kit – the house came with a garage, but we didn’t have access to it. You sure don’t want fieldwork geographers in your clean rental house! Upon coming home, I also changed the kitchen into a field lab (as we do), but unfortunately, the microfossils we hoped to find flaunted their absence. 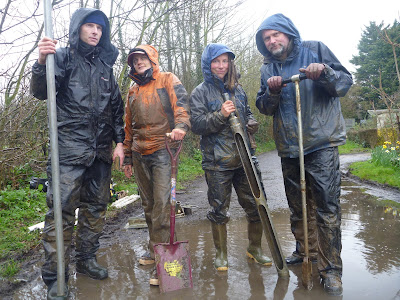 What we looked like at the end of the day

The next day we made sure we first bought some very sturdy wooden beams, to place underneath the jack, before we would sink a core down anywhere. We knew of a quarry that had interesting sediments in it. We didn’t have permission to core in it, but we sure could core somewhere near. We tried the hand auger beside a path; we hit lots of gravel. We tried a bit further: we hit lots of gravel. Antony wandered away to ask the farmer on the adjacent field if we could perhaps core there. We could! But that would be something for a later day. We now went home, to discuss the Iceland paper I had been working on. The Durham crew came up with excellent suggestions. That paper is going to be rather spiffing, if nothing goes wrong along the way. 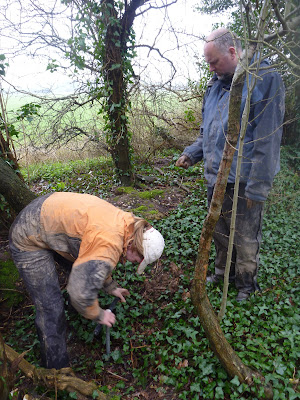 Trying our luck somewhere else

We started our Sunday early. We went back to the farm where we had obtained permission to core. Unfortunately, we wanted to do that on the far side of his field: that meant lots of lugging of very heavy equipment over quite a large distance. But we managed! And we started coring, unhindered by gravels. We cored meters deep, until we hit gravels again. We ferried our kit back using the farmer’s wheelbarrow, which he had kindly offered us, and then we were out. Off to the field lab! Where, unfortunately, I would find no microfossils whatsoever. This wasn’t our smoothest fieldwork so far. Five days, and no result yet! 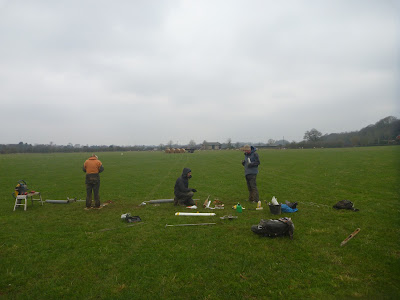 The much greener field we cored in later 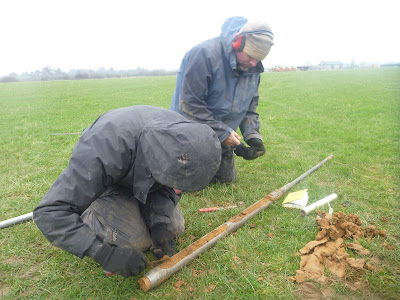 It was cold! If you click this picture to see it full scale, you might just see some tiny little snowflakes on the background of the men's dark clothes

We don’t give up. We just plough on. The next day we drove to another farm, and started to drill a hole. This location surprised us with wet gravel. And that’s not good; when you withdraw the core barrel, the borehole will collapse, and you keep on coring through the same gravel layer. And with a bit of bad luck, the barrel at some point gets caught behind a large chunk of flint (that was what the gravel was at this location) and you can hardly get it out. And guess what? That happened. We applied all the strength we had to the levers of the jack. And then some. And it hardly budged. It was a slower repeat of the first coring day: even with the solid chunks of wood under the base plate, we pushed the jack slowly into the ground.  Straight through the wood, which soon lost its solidity. Pure and dogged determination got that barrel back to the surface again. And when we were packing the whole gear up, I noticed we had even managed to push small flint pebbles into the PVC of the pipes that support the jack, and that we had also bent the solid steel bottom plate. We decided to call it quits. This area was not suitable for manual coring and/or core extraction. This was a job for a professional drill rig. We would come back with one of those! 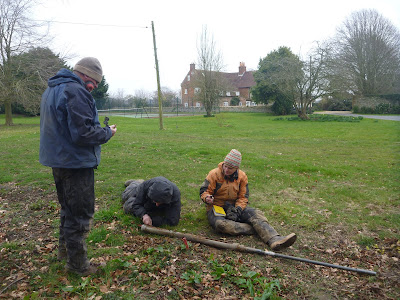 The last field: in the back garden of a well-of farmer 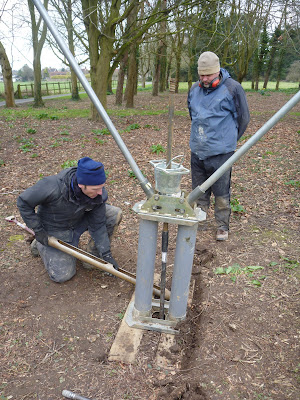 We pushed the system into the ground asymmetrically, which didn't help. Antony is trying to straighten things up a bit.