Deep down in Devon

My first SRT trip was in Wheal Fanny. And what an introduction that was! It's part of Devon Great Consols, and it was the biggest copper mine of its time. The main lode is very thick; they've mined away meters of material, which makes it very imposing. And such a wide lode also asks for very serious timbering; the like of this you won't find anywhere near. But I'd only been down the first serious drop. And I know there's more. So when Rick suggested an SRT  trip, as he felt like one, I suggested, among others, the deeper levels of Wheal Fanny. And the suggestion was taken over. 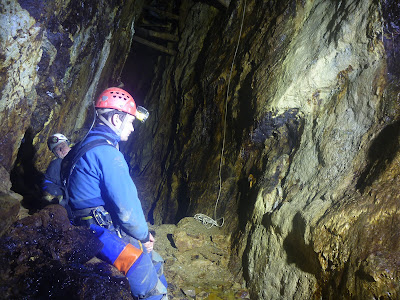 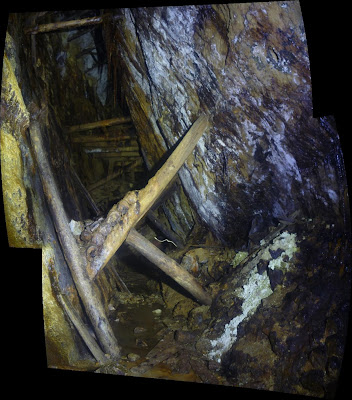 Some of the timbering on 15 fathom level. The wiggly white line is Hugh's headlight when he walks through the view. 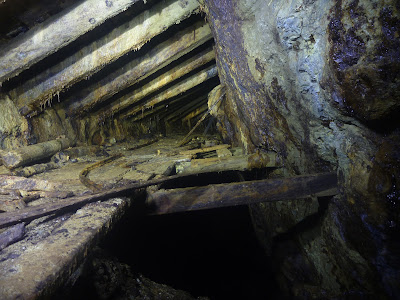 The timbering is relatively solid, but there are gaping holes in it. Some of them lead further. 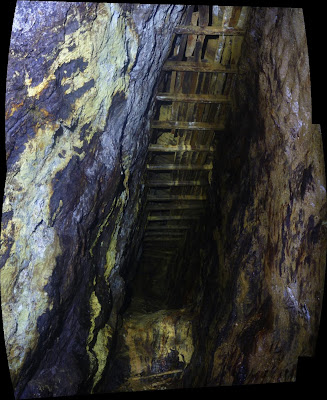 This composite picture shows the underside of the platform in the picture above. As you can see on that pic, it has rails; it must have carried heavy loads. But by now the planking is giving.

From this level down, all was new to me. We dropped down to a ledge, from which even more of the main stope was visible. Very impressive, but very hard to take pictures of! From the ledge we went even deeper. That level had a bit of a scramble down to a puddle, and from there a another level on timbering, which was so bad I dropped down to the level below, which had thigh deep water. Hugh turned out to have just walked overhead... 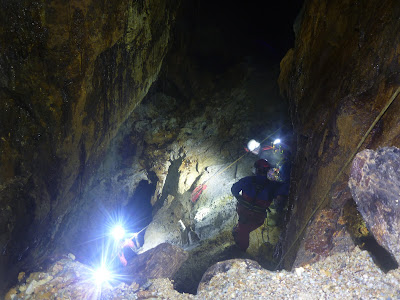 Me taking a picture from 15 fathom level down to the folk on the ledge below. Alex is on the rope (second glare from the left), and the glare on the left is someone who is already down at the deepest level we visited. 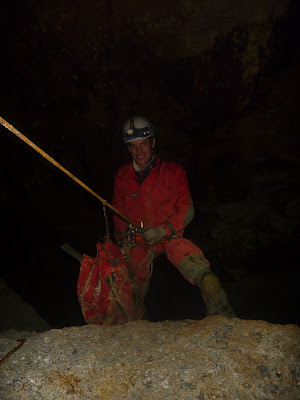 Hugh on his way to the deepest level

When we got down to the deepest level I started out being flash monkey for Dave. He made amazing pics! But then we went into the direction where the others had disappeared to. We found Paul and Alex relaxing away, Rick and Richard muttering in the distance, and Ali trying to get from one to the other. It turned out that Rick had found a hole in the ground, had tried to bolt it, had run out of battery power for the drill, but had then seen Richard cross quite without it being bolted, had done it too, and invited people to join. So we did! There turned out to be several holes more, but it was all quite negiotiatable (that should be a word). So we went on! And found more main stope, imposing as ever. But somewhere along the stope it got narrow, and too deep to go on without yet another rope. Oh well. It was getting close to beer O'clock anyway. We turned back. 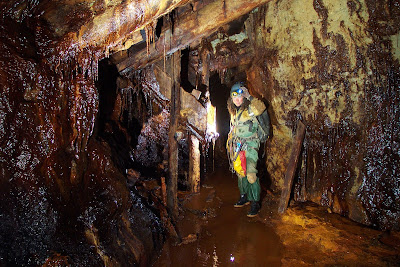 Me on the deepest level, next to a delightful ore chute

When I was freehanging in the stope, and the people behind me were nowhere to be seen, I had a try at on-rope photography. A rather unsuccessful one, unfortunately. But then the last bunch appeared, and I got myself out of that rope and out of their way. And soon I was washing my kit in the stream. It had to be done again at home; that stream was probably acid! But it got rid of the mud.. And then we were off to the Queen's Head. 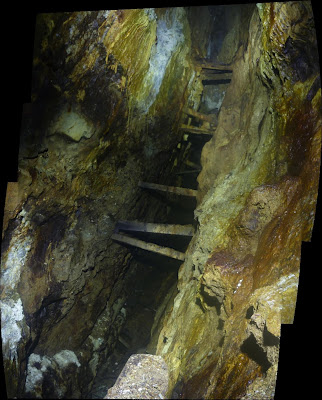 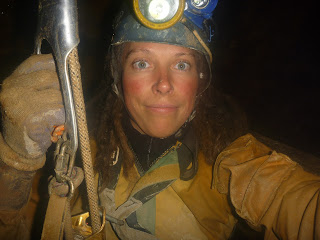 Me happily dangling from the rope

I'm not sure if I will ever go there there again. But now I've seen the bottom level! I can now safely move to York...