When I received the new pack there were only two weeks left to my travels to Norway. So it was vital to try it out soon! And to my delight, Hugh wanted to come along. His tent had only seen the northern hemisphere from a cupboard. This was the time to bring it out! So on Friday afternoon I gathered everything (well, almost) I would need in Norway. I wanted to know if the bag could fit all that. And I soon found out it couldn't! Even this pack will need stuff strapped to the outside. Although the manufacturers don't expect that: it doesn't have much possibility for strapping. I'll have to work on that... 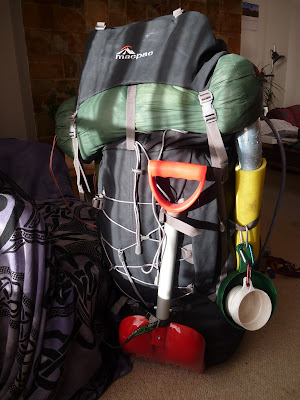 The bag with all the kit - still stuff on the outside!

Because of space reasons I decided to leave my sleeping bag liner and my down slippers, but I made sure I still would have the proper amount of weight: I brought two litres of hot water and 3 litres of cold; much more than you would on a snow hike. And on a hike we don't carry a tent each. But then I would have not only the liner and slippers, but also more food with me.

I picked up Hugh, we went shopping (neither of us had enough food in store to cater for the weekend, and perhaps not enough fuel either), parked the car, and off we were! It was a very beautiful day. Sun everywhere! And the pack was heavy (I would later find out it was ~27kg) but it wasn't spoiling the fun. 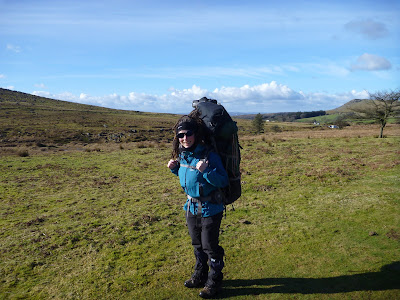 The bag where it belongs. And lots of sun! Notice, too, the new jacket and new glacier glasses... 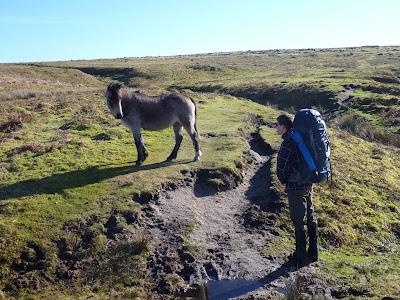 We walked for two hours and then had lunch. We spent almost an hour sitting in the sun, listening to a stream, and just talking. Very relaxing! And it was extra nice given that one can't take such good spirits for granted in times like these. But we hadn't come for conversation, so we loaded up again and went on. All still went well, although I never had much of a chance to keep up with Hugh. He had brought a full pack as well, for symmetry reasons, but it was much lighter, and even with no difference in luggage I can't keep up. When it went uphill I struggled. And the long stretch through the typical Dartmoor hummocky terrain was hard too. With so much weight on your back your balance is not as good! 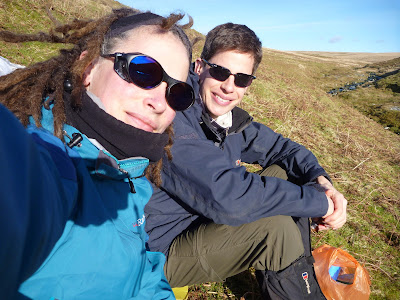 Lunch in the sun. Very nice!

We picked a spot next to a stream to camp. It was still early; the sun was setting, but in early February that doesn't mean much. We just looked at the clouds, drinking whiskey, chatting away, until we got hungry enough to start cooking. And after a nice dinner it might only have been 7PM, but it was time for bed. I just tried to take some long exposure time pictures and then I went into my sleeping bag. Nothing like a 12 hour night after lugging such a heavy bag around! 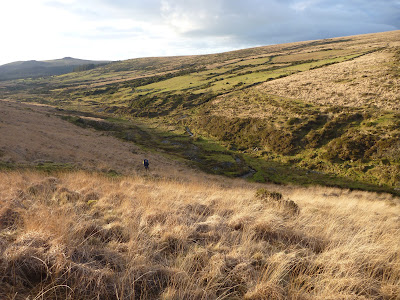 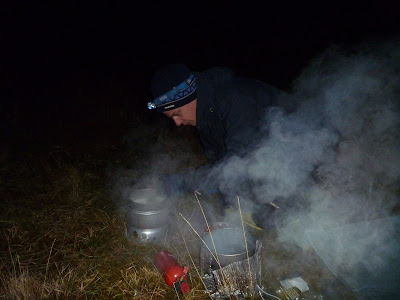 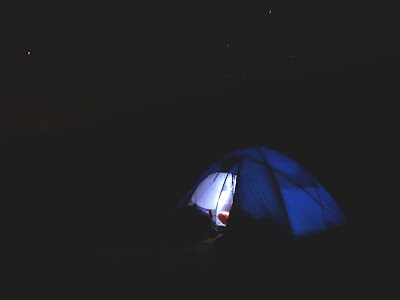 Sometimes I woke up that night, and I would hear the rain on the roof of the tent. That didn't bode well! But it sounded like only drizzle when I woke up at 8, and decided it was time to get up. When I emerged out of the tent I found myself in a large cloud of fog. But that didn't spoil the fun; we had breakfast, packed, and set off again, into the mystic-looking landscape. It was most atmospheric! And with less water in my pack I found it easier to keep up with Hugh, who navigated us spotlessly through the thick for, bach to the car. Which, to my sadness, had only one wing mirror left. Not again! No good news for the car, but pack had done its job! It's never very comfortable to carry such weight, but if you have to do it anyway, you might as well do it with a bag like this! I look forward to using it up north! 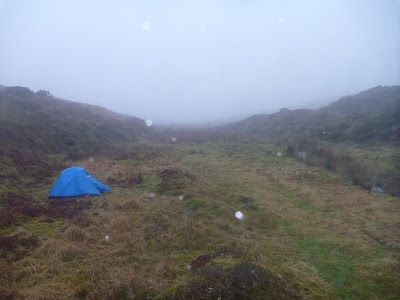 The next day the weather was quite different. 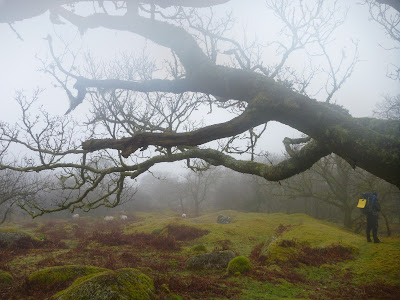 Moss, fog and naked trees together create a mysterious atmosphere
Posted by Margot at 09:04