New venues everywhere! We had only done Little Duke two days before Pepperdon mine was on the list. The mine, the terrain around it, and, most crucially, the house that stands there, had changed hands. Somehow the club had found out about it, and received permission from the new owner to come and visit. A description of how to get there was sent around. So I set off with Paul. The description included white railing; some time spent on Google Maps streetview had taught me exactly where that could be found. But the houses this lead us to didn't seem right. Some driving up and down the road followed, and some ringing doorbells. In the end, some friendly lady pointed us in the right direction. On the way there we saw many more instances of white railing...

When we got there we met one early club member, and the owner, by the name of Jeremy. A while later the rest followed. Soon Jeremy lead us up the hill, to the highest adit. It was a bit wet, and didn't go far, but it was nice. Nice enough for Dave to take many pictures; by the time we got out almost everybody had vanished. Luckily people with torches are easy to find in the dark; we saw Jeremy waiting for us at the next entrance. This next adit had some nice features: high stoping, two winzes, one of which deep and dry, and to be crossed on pipes that lay over it, and one flooded and adorned with a long-dead sheep. 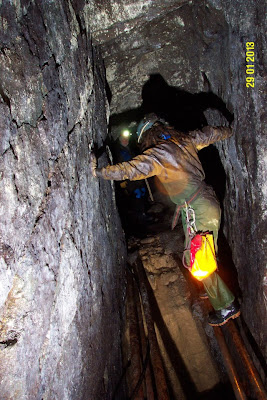 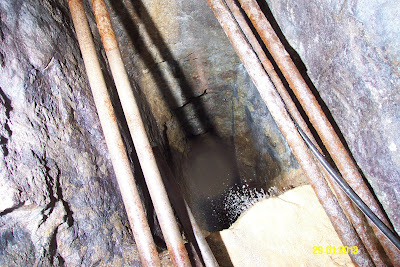 What you see when you look down it

When we finally emerged out of that one, it had become hard to detect any people, but we knew the last entrance was right at the house, so we headed for it, and were just in time to see everybody else emerge from it. We got into this one too; it was the wettest, with water coming up to the waist, and coming out of the walls and ceiling in several places. This provided some nice photo opportunities. When we got out we changed in the shed (it was raining), thanked the owner, and set off to the pub. A mine of his own; the lucky fellow! I would be interested to drop that dry winze, although I could imagine it only leads to flooded passages... 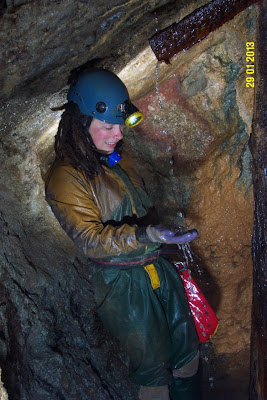 Water coming out of the wall in the last adit 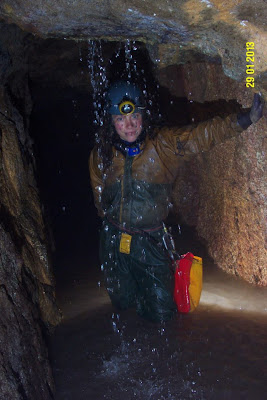 And water coming out of the ceiling. All pics by Dave.
Posted by Margot at 09:08