Rescue: all together now

The wettest summer on record is a good time to hone your water rescue skills. We cave rescuers need some water skills as caves and mines might well be partially flooded (or entirely flooded, but then we don't go there) or at a river bank. And if we get water trained anyway we migth as well do it well. If there ever is a big flood, the conventional rescue services might end up a bit short of people, so if we train as well they can call upon us for back-up. And if we're back-up anyway we might as well train together, so we are used to each other. So with that thought in mind I drove to Newton Abbot for a combined training.

It was a big training! All three Dartmoor rescue teams were there (Plymouth, Okehampton and Ashburton), and us, of course. We would scour a marshy park for casualties, in teams. I was assigned to an Ashburton group with one Plymouth girl added. I would be their water saviour; they were all in their normal outfits, while I was in wetsuit. If they would fall into the river I would have to get them out. And if there would be casualties in water it would be me again to retrieve them. 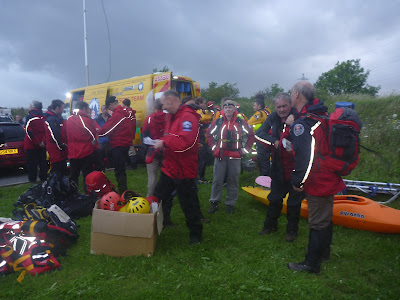 The place was swarming with rescuers

We set off. Within minutes I was overheating. But there was succour nearby; we found the first casualty on the other side of the river. One of the team radioed on to control to ask for a boat to get him off the island. The scenario was he had been surprised by the tide. We would wait for the boat to show up. That gave me time to cool down. 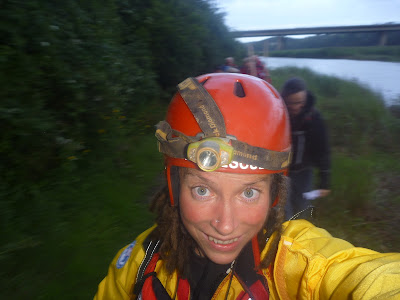 Me in my water helmet, followed by the rest of the team

I am a law-abiding citizen, so I politely asked if I could get into the water. And this is dartmoor rescue, so a foot of water is suddenly a major hazard. I was told it was dangerous! It could be muddy! I could only get in if I would hold on to a stick held on the other side by another team member, on the shore. Oh dear. Cave rescue has had to come out and rescue a guy from heat exhaustion in a cave. I don't think we have had to come out for someone who had stepped into a slow-flowing river. It is another example of people losing all perspective in H&S issues. Oh well. I got to bob around in the river. And after a while they decided to ditch the stick. It took a while for the boat to arrive. 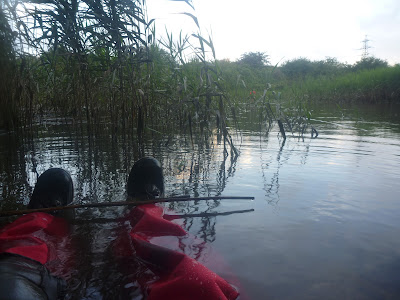 Me cooling down in the river; the red speck on the other bank is the casualty we kept an eye on

While waiting for the boat I got called out to the next site, where a confused man had wandered into a pond. Same thing there; they didn't let me into the knee-deep water without tying me to a rope.

That location had a casualty with a spinal injury too; she was put into a vacuum matress, onto a stretcher, and wheeled away. We moved on. I got to check for casualties under the bridges. Not tied into a rope! These mountain rescuers were becoming more reasonable as the evening drew on. No casualties under bridges, but we found a plastic casualty at a gate. With him (or her) the rescue was a bit more half-hearted. We imagined not only the casualty, but the stretcher and the ambulance too. It would be the last casualty we found. Which was fine; it was getting late anyway. I had to get out of all that kit, and put something dry on. 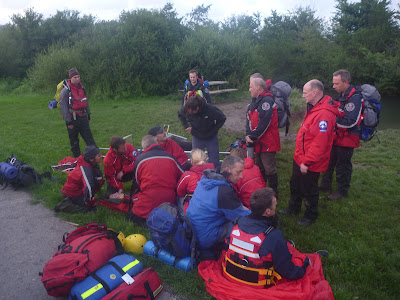 Attending to the "injured" casualty

We had a debriefing, where some issues were discussed, indeed including the perception of risks. But altogether it had been a success! These folks sometimes get onto my nerves, but in case of a combined call-out I'll have to put up with it anyway. And they are a lot of fun to hang out with. One of the girls turned out to do research on social networks in killer whales! People keep amazing. Next time we train together I'll try to be there again.
Posted by Margot at 10:13