I was on a roll. I kicked off my Easter break with a lovely walk up yr Aran with Kate, and had then gone into Dinorwic with Miles. Does that mean I had had enough social contact for a week? No! I was having a whale of a time and was not done yet. Next on my list were the newlyweds whose wedding I had attended 1 1/2 year earlier. I knew them because the groom, Juan, had been my officemate. They had moved back into the area over the last lockdown period. It was time to catch up! I had already heard a bit about them from my friend Dani who turned out to be their neighbour, and I had bumped into Caro on one of my runs. But now I would meet them on purpose. The idea was to have some tea in their garden, and then go for a walk with Caro.

They live on a funny street with the houses not parallel to it, but in rows of right angles. And the rows have numbers, and the houses within the rows have numbers too. Of course I went to row X house Y when I should have gone to row Y house X, but that was easily remediated. Caro put the kettle on and Juan showed me the garden. And Dani was gardening next door.

We had a nice cup of tea, and filled in the time since we lost saw each other. A lot had happened! Not least that they not only expected a child (I knew that) but had already decided on things such as what its name would be and what languages it would be raised in. And where they worked.

After tea I whisked Caro away and took her to Mynydd Llandygai, to walk around in the empty land below the dam of the reservoir. It was gorgeous weather! And I didn't know Caro very well so we had a lot to explore.

We walked until it pretty much was dinnertime. I think we'll do that again! And I know that her life is about to change dramatically, but I'm sure we'll get another walk in before it gets there… 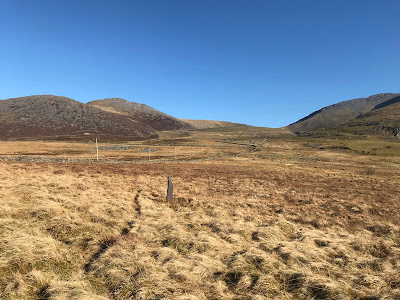