The leaves were turning, the beech trees dropped their mast on the cycle path, evenings were short. It was clearly autumn already! But one day, after a very Indian Summery few days, storm Callum hit Wales. And then it was proper autumn!

On the Friday I drove to work; the weather was atrocious, and I would have dinner with Jaco and Marjan in the evening, and I figured I wouldn't be keen on biking all the way back through a storm at night. I do have a bike in the office, though, so when I had to go to Bangor to teach I could choose. Bike or drive? The wind was howling around the office but I figured it might just sound bad. I took out the bike.

When I got outside I realised it really was as bad as it sounded, but I decided to give it a go anyway. It was a bit of a challenge! I had only gone some 100m when I was blown off the road onto the pavement. Oh dear. But no harm done. I made it to the bridge! And walked across. No point trying to bike it in weather like that. And from the bridge it was OK. Made it!

Biking back I walked two more stretches as the wind was really strong. But I got back to the office unharmed. And later I drove to Jaco's, through the dark streets; the streetlights weren't working so I suspected a power failure. They had had one themselves, but at least in the house the power was back on.

I had been right about not wanting to ride back through the wet night. The weather was still pretty bad! And I was very tired after a hectic week. And I was a bit alarmed by a sign on the A55 saying 'A5 closed Bethesda' but the closure must have been cleared up by the time I got to the village. I got home OK! I later saw a mention on the BBC website about a landslide on the road but that must have been cleared rather fast. 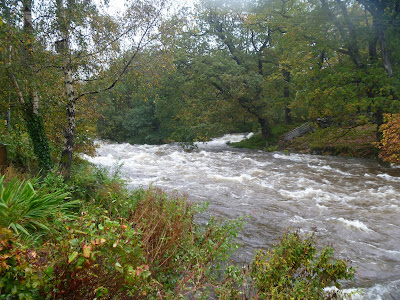 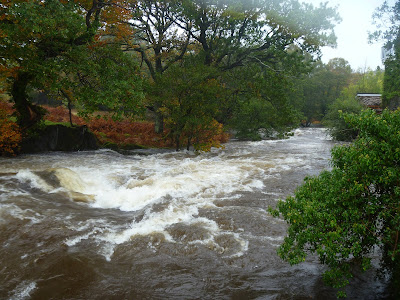 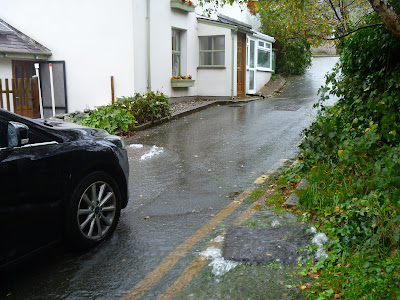 I also had to go and hunt for my bins. The big general waste bin is chained up, so that doesn't go anywhere, but my food waste bin had gone scampering (in two bits), and my recycling bin (which is a stack of three bins on a trolley) had lost its top third. I found everything back though! I should think about securing them better. And with all that I think it's really really autumn now! And this first autumn test of the house with me in it has been successful. I really hope I get a log burner soon. Then I can enjoy it even more!
Posted by Margot at 09:07