Now I have a permanent job I can go look for a house to buy. I now live in a very convenient location (even uphill only some ten minutes on bicycle from work) but my view on both sides is of a soulless pebble-dashed seventies suburban house or row of houses. And it's so beautiful around here! So I would love to now move to some old miner's cottage with a view on wilderness, or something along that line. So I'm back on the property websites!

My two favourites are a miner's cottage at the edge of Bethesda, and a cottage next to a chapel at the edge of Llanberis. They are lovely! I also saw another one; in a nice location, big and cheap, and looking solid, but it didn't have a garden at all. Some people will roll over the floor laughing at the idea of me being responsible for a garden, but I think it would be nice to be able to have a cup of coffee outside. And some of these gardens are on really infertile ground so they might be rather low-maintenance!

When I was in Bethesda anyway, for Martin's do, I decided to wander past the miner's cottage. It was dark, of course, but I suppose seeing a house in the dark is almost as useful as seeing it in the light, as half of the time it will be in the dark anyway.

When I walked up I came past something that looked like a ghost house. What a pity it had delapidated to the extent of now being a mere ruin! But the road was lit yet atmospheric. Soon I saw the lights of the row of houses I was heading for. They really were at the edge of everything, overlooking the entire valley. Biking there would be a bit of a chore! But it was beautiful there. And there was even a bit of parking space. I loved it!

I wasn't quite sure where to start with all the organisational aspects, but I did some light googling and decided I would prefer a mortgage with a firm that tries to steer clear from oppression, pollution and the likes; this means my own bank, the Co-operative, is the most likely candidate. They're not endlessly ethical but better than most! And that they're my own bank makes things easy. So I decided to phone them first. They were very helpful. And they have already given me permission to start bidding. I can get an enormous mortgage! I suppose that's the advantage of having no dependants, and not having an expensive lifestyle so the money accumulates on my bank account.Tomorrow they'll tell me more. And I have an external advisor: Tasha offered help. Which is very nice of her! She buys houses all the time so she knows what she's talking about.

With the bank behind me I can move on. I have viewings booked for the second of January! Watch this space! Maybe they're not as great as they look; they may be small and damp and lacking in heating and insulation and whatnot. But one way to find out! And if these don't work out, others will appear! Watch this space... 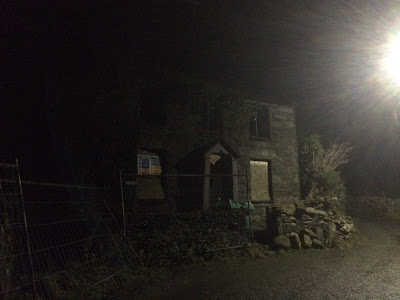 The ghost house on the way to the house I would like to go and view
Posted by Margot at 09:26