When I finished my education I was quite broke. My PhD had seriously overrun its period of funding, so I had been living off my savings for quite a while when I finally got myself a paid job again. And PhD students don't earn enormous amounts of money, so it's quite lucky my savings actually stretched that far. My first 'proper' job, though, as a postdoc in Norway, was very well-paid; these Norwegians arent't stingy. Upon receiving my first pay check all my financial worries were over.

At the end of that job I found a next position in the UK; not such a generous country. I took a serious pay cut to start working on sea level research. I did two postdocs in that field, both starting in Plymouth, so for both the pay was the same.

Then I went to Bangor for a fourth postdoc postion. The pay in that neck of the woods was actually lower than the pay in Plymouth, so I suffered yet another pay cut. Bangor also didn't provide financial support for relocation, as Plymouth had. I did, though, rent a more expensive place to live than ever before; the trauma of having an awful neighbour was still reverberating in my system, and I was happy to have moved to a very respectable neighbourhood.

At the end of my postdoctoral period in Bangor I had experienced ten years of increasing rents and decreasing wages. I had started to worry a bit. I know money is only money, but I wouldn't want to have to extrapolate that trend; the idea is that with increasing experience your work becomes  appreciated more, and thus remunerated more. In my case I seemed caught in a downward spiral. Of course I could just keep moving into cheaper and cheaper accommodation, but that's not the most enticing prospect one can have.

And then I became a lecturer. These earn more than postdocs! So at the end of these ten years finally my fortunes turned. So for at least five months I can feel like my knowledge and skills have grown so much it shows in my paycheck, and have some confidence the tide has turned for real now... but I can't get complacent. Let's see what awaits me after this very short contract! 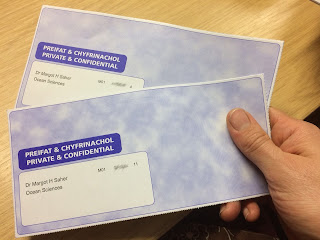