I had done the Anglesey Half Marathon once; I had (accidentally) broken my personal record on that distance then. I wouldn't do anything like that this time! The day before I had felt quite shit, and due to teaching being very busy I hadn't trained. But well a run is nice. And a race starting only a 15 minute walk from home is nice!

I got up, had another paracetamol against lingering headache, kitted up, had breakfast and left the house at 8.45. It was raining, and the forecast was it would keep raining for the duration of the race. Oh well. I got to the start 8:58 or something. Early enough! I made sure to start in the back; I didn't want to start too fast. 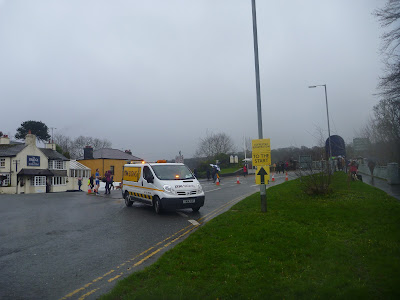 The roads ready for the race 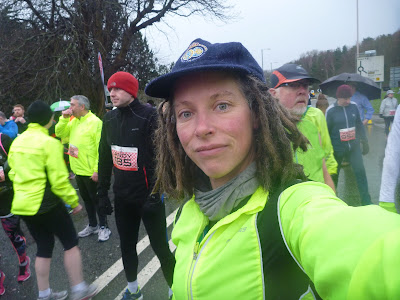 Me ready for the race 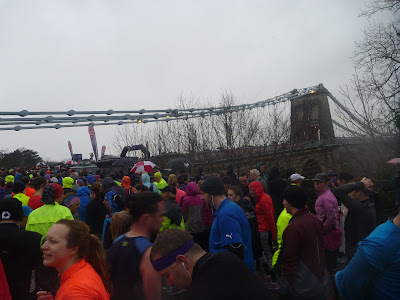 The crowd ready for the race

I pootled along at a leisurely pace. It was nice! Although my stomach was hurting a bit. I figured that would go away. After a few km I saw a colleague; Connor, who had helped me with my MATLAB. I stayed with him for a while. We had a nice chat and it was all very pleasant. I had to moderate my speed a bit but I wasn't feeling ambitious anyway. It was good to be social! Connor is a good chap and a half marathon is long enough to carry the risk of getting boring... 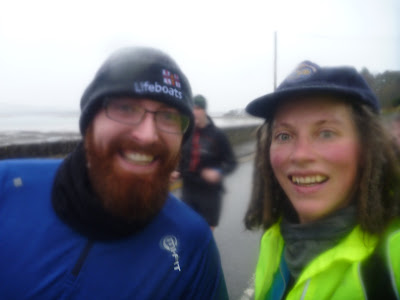 Slightly blurry picture of Connor and me

When we got to the halfway point I started to want to speed up a bit, and Connor encouraged me to give in to that. I said goodbye and scooted off. My stomach ache was gone by then! And it was nice to overtake lots of people. Slowly Menai Bridge came closer. It was nice to see the 10 mile sign, and the 11 mile, and 12, and then it didn't matter anymore. I had a good speed, was feeling good, and thundered over the finish line without a clue on how long it had taken me. I ate a half banana, drank some water, received my shirt and medal, and walked away. I was soaked to the skin, and didn't want to get cold. 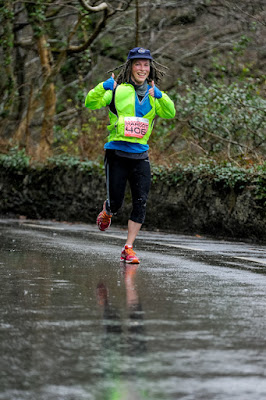 Solo running, near the finish; still with my hands in my sleeves...

I had figured I would be very tired after the race, so I had decided to bring my credit card with me. That way I could walk past the supermarket on the way back, and get the groceries over with. Then I could just spend the rest of the day at home! And so I did. When I got home I immediately got rid of all my soaking clothes and jumped into the shower. That was lovely!

I had done it in 1:52:37. That was almost exactly the time I had run in the Conwy Half Marathon; another half I hadn't trained for! That's quite a nice coincidence. And I did the second half a minute per mile less than the first half; you could clearly see the effect of me going solo! My spate of racing triumphs has come to an end, but who knows, I might have another one later!
Posted by Margot at 16:37