Some mines just keep surprising you. I thought I knew Parc after many trips. But I didn't! There is a go-to part of the mine with nice industrial relics, and from there you can squeeze into a level leading onward. I had done that once, but I didn't like the air, so I had turned back. Rumour had it, though, that someone else had been exploring there, and had clearly not suffocated. We wanted to have a look for ourselves!

We went straight up. Some of us hadn't seen the industrial bits yet, so I sat down for a sip of water while other had a look. Paul then vanished into the squeeze. I still wasn't sure about the air, so I soon followed. I found him in excellent health at the bottom of a rope. Good! I first tried the rope just hoilding on to it, but it was the slipperiest of slopes and I decided a harness would be a good idea after all. I went back for it and put in on. In the meantime, more people appeared. 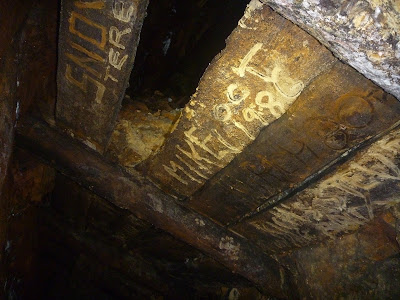 What not to do in a mine

I got up, and out of the rope. I was in an interesting looking stope! Not a very nice one; it was full with lots of loose rubble. I followed it to another stope I couldn't get into as the floor was gone, and took some pics. I figured I'd better report back! I yelled down it was well worth coming up for a look. I could hear David was coming up. While he was doing that I jumped into a level on the side. It looked like a dead end, but I thought I would check anyway. And it wasn't dead! It split, and split again, and went up, and god knows where. I went back to tell David. Then I went back to explore some more. 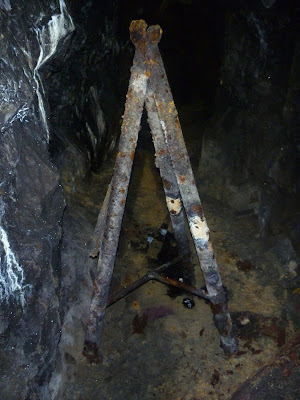 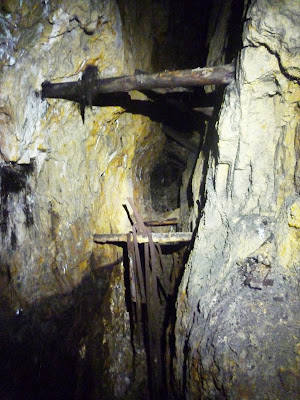 It just went and went. I found winzes and shafts and whatnot. I didn't want to go endlessly far; David would have no idea where I had gone! When I was on my way back I could even hear him yell; he clearly wished to find out in what direction I had disappeared. I yelled back and soon was with him again. We decided to go back; Andy was coming up too, and wouldn't know where we had vanished to. 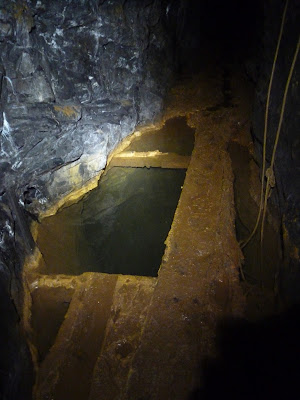 Disconcerting: a flooded winze in a high level. What is keeping that water there?

He was close to the top when we got back; soon he was with us in the level. We went to where you could climb up; there had been rumours of being able to come out this way. And out often means up! I clambered up. Nothing to the right, a blockage ahead... I clambered, a bit awkwardly, to the left; that went to another stope. Would be nice to go back and drill that, and drop that too! I yelled into it but the men didn't hear my voice from that direction, so it wasn't connected on the level below.

I managed to clamber back. We then went to the right. I had walked onver a very soggy plank over a flooded winze; that had worked, but that plank wouldn't last forever. Both David and Andy are noticably heavier than me; maybe best for them not to cross. We went back and went ahead instead. That lead to more stoping and another shaft. So much to see! But there were people waiting for us so we left it at that.

We went back, and told the others to start making their way out. There was a ladderway with a crawl ahead; that would take long enough. And indeed, we caught up with them in no time. Without too much delay we came to the entrance adit; there I decided to do something about my lack of hygiene. The roped pitch was as dirty as they come, and I was entirely orange. Time to rinse at least some gunk off! 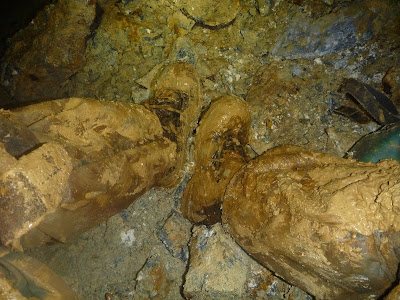 It was one of those days. 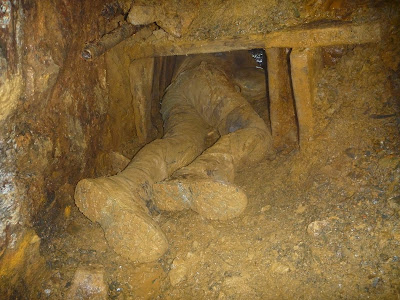 It was nice to get back to the cars and have some ginger cake, knowing the next day would be a day off. It's more relaxed being home at midnight under such circumstances! And we have another adventure ahead: fully explore that level...