Yet another new Welsh course

It's that time again! I had been in a Welsh class, the so-called "Cwrs Pellach", for four months. Given that when I started that course I had racked up an average of one Welsh course per 2.5 months I should not have been too surprised to not last very long. But I was! I was learning a lot in this class and it's nice to learn with the same people for a while. And the tutor was very good. But it came to an end anyway!

Jenny wanted me to do the highest level course, "Meistroli", in addition to this one. Meistroli is the one that gets you ready for your A levels. But I was two levels down! Between Pellach and Meistroli still came Uwch. But if you try to improve your Welsh outside the classroom you can rise above your class. I had passed my GCSE in spite of only having just started Pellach; you are only expected to do it after having finished it. I may be able to wing that one too! And I was not certain of whether the workload of two courses would be a good thing.

I decided to see if I could add the Uwch class, taught on Tuesday evenings, to my Monday evening Pellach class. I figured doing A levels on Uwch may be a better idea than skipping straight to Meistroli. But then the message from Sian, our tutor, arrived. She was going to move the Pellach class to Tuesday! So that plan went out of the window. So which course to choose?

There was no choice. It turned out that I hadn't been the only one contemplating to enroll in the Uwch course. One after the other mentioned they wouldn't do the Tuesday Pellach class. So on the first class of the season, the last one to be taught on Monday, only two of us showed up. The course coordinator popped by; she asked if we were willing to leave this class and move on to Uwch. We were. And it would be good, but it was sad to leave Sian.

The next day the Uwch course started. It was good! There were five people from the Pellach course, and five others; one of these was sort of familiar as he was the brother of one of the Pellachers and the husband of another. And I knew the tutor; Elwyn is the superstar of Welsh for Adults. He is the one who designed the whole course (that is, from very start to A level), an he's so spiffing he has his own Wikipedia page. I had mainly met him through an exam-preparation-class. And he's omnipresent. And a great teacher and universally loved man.

This class was half an hour longer than the previous one, and everyone in it is keen and speaks pretty much Welsh only. It was very good! And challenging; Elwyn tries to make us understand and speak colloquial Welsh. Which means you have to not only know "the weather hasn't been great" is "dydy'r tywydd ddim wedi bod yn gret" but also you're supposed to pronounce it "'dy'r tywydd 'im 'di bod yn gret", for instance. A Welshman would only need three milliseconds for that sentence.

I got home very satisfied. But also with a mountain of course material; only on Monday had I received the second half of the material for Pellach; we'd only reached chapter 6 of 18, and the Uwch class had already reached chapter 9. So that meant I had to do 21 chapters on my own. That's almost 2 years worth of material! Time to get cracking... 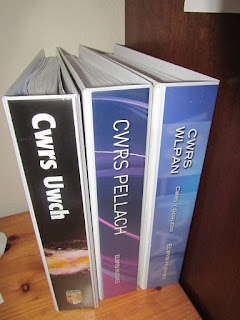 A lot to learn!