We should have sailed Wednesday morning early. We would instead sail on Friday at noon. So when noon struck, a lot of eager scientists had gathered on deck. Would it really happen? The gangplank was still down. But then we saw it being hoisted on board. We were going!


There was a clear sense of elation when we steamed out of the harbour, into to Solent, and past the Isle of Wight. We were moving! And we would first test out the gear, with which there had been so much trouble. Better do that not too far from land. 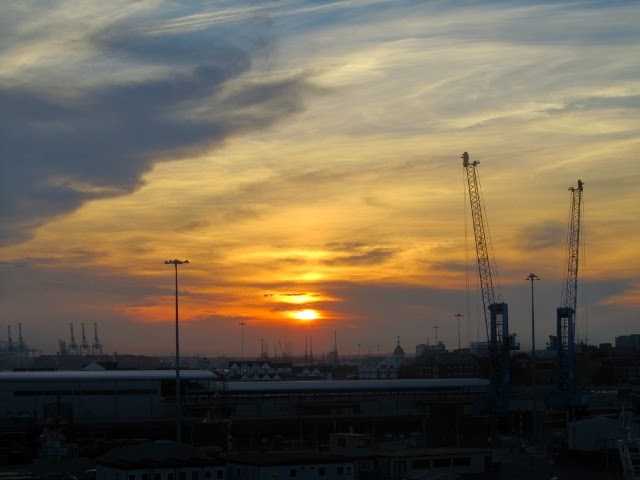 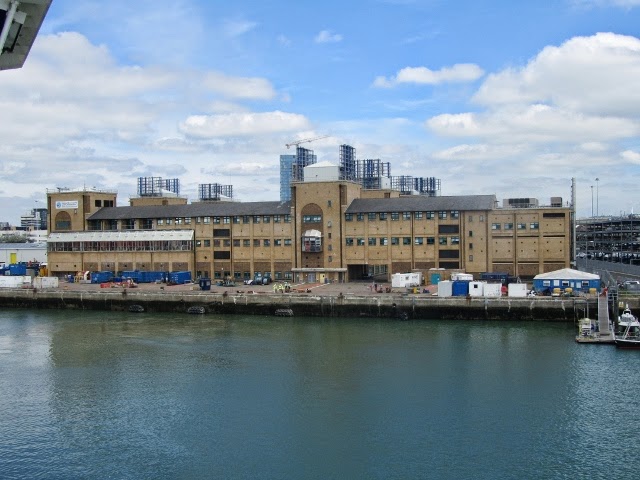 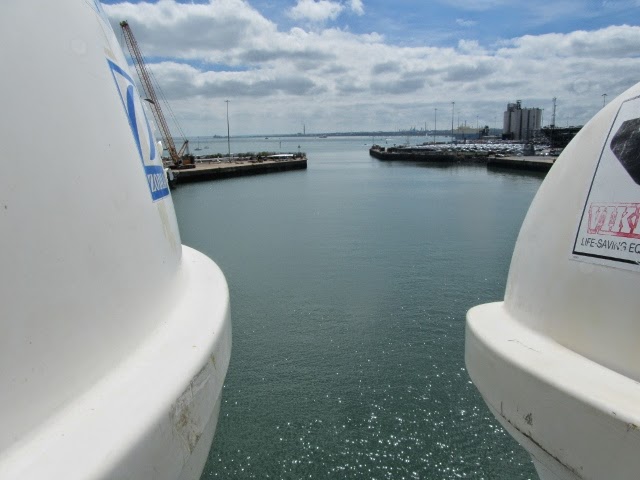 The enticing exit of the docks, seen from between two life rafts
A little off the Isle of Wight we stopped. It should have been 3PM, but it was 4.30. The scientists gathered excitedly on the aft deck; most of us had not seen a vibrocorer deployed! I have seen gravity cores, kasten cores, multicores and piston cores deployed, but this was something new. Exciting! I thought. It wasn’t. 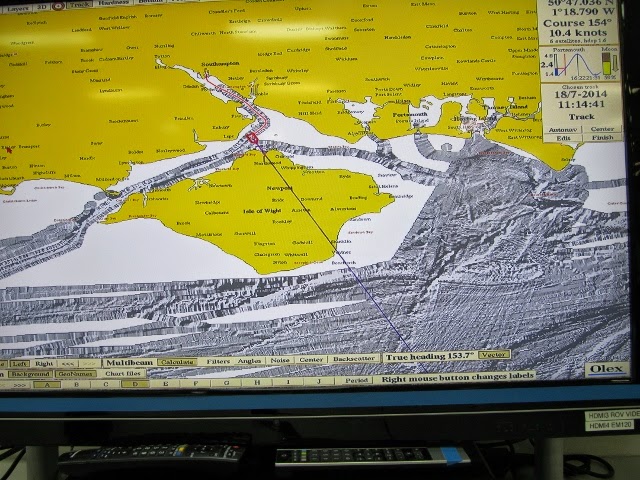 We can follow the ship's progress in the control room
The BGS, who run this vibrocrer, were just standing around. Having a chat, looking at the sea, staring at their shoes… it wasn’t very exciting. Later I found out there was some communication issue between some people; probably between the bridge and the BGS crew. And then, finally, the whole construction was lifted in the air, and dropped off the back of the ship! It descended for a short while (we were in shallow water) and then we saw the cable wobble up and down. That must have been the vibration! They kept it going for a while. We had dinner while it was wobbling away. And then it came back on board. The core barrel was laid on a bench. When they removed the shoe and the core catcher, gravel fell out. Ah. Difficult sediment! 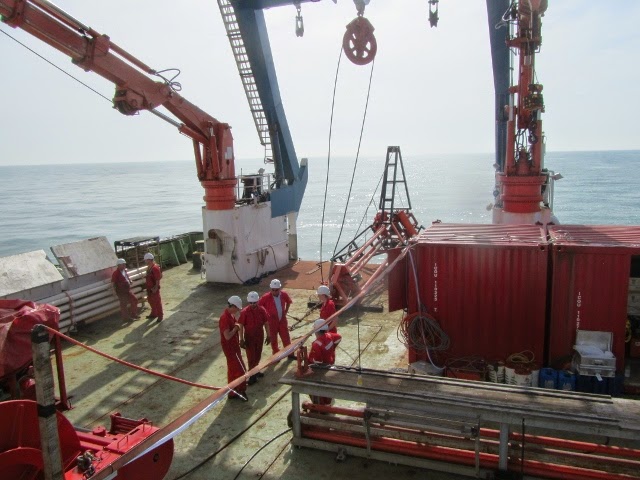 The vibrocorer lying prostrate on deck, waiting to be deployed
When the entire liner was extracted we saw it was largely empty. As one would expect, as vibrocorers don’t go through gravel easily. But this was only our test core! A little bit was enough. We cut off the bit of liner that had sediment in it, and capped it. Normally, that would be it for 6 hours; we will let our cores come to room temperature before sending them through the core scanner. It seems to be necessary. And only after having scanned them, we can cut them open and see what we have. But now we could proceed immediately.
There was some heated argument about how to go about things. There were about as many opinions on how to process a core as there were scientists present. And some of us are rather assertive! But we reached consensus. I hope we soon get into a routine and can keep our egos to ourselves.
Then there was more faff. The core cutter had vanished, and when it reappeared the blade turned out to be sticking out too much. And it was also jammed into position. It took forever to get the tiny, 60cm section cut! We were getting weary by that time. And gravelly cores aren’t easy to split, even after the liner has been cut (you generally only cut the liner with some sort of saw, and then use a cheese wire to cut the sediment, but gravel defies cheese wires), but we got there in the end. We did a proper core description, photographed it (which was also a useful exercise; the system has been tuned now!) and tried to do geomechanical measurements on it. The latter wasn’t much of a success; gravel defies that too, but we now think we sort of know how the equipment works.
That was all we needed with that core. Time to wrap it! I was glad; I wanted to have a bucket of tea and then go to bed. And that’s what I did. So the trial has been completed, be it in at least three times the time I figured it would take. A lot of questions sprouting from the procedure have been answered. We should be ready for the real thing! Which should kick off after some 35 hours of transit time. And then we should pretty much keep going until port call on August the 4th…
Posted by Margot at 12:09